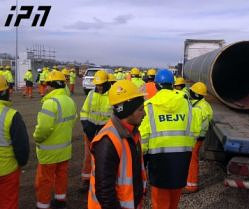 TBILISI, DFWatch–A strike among workers on the BP South Caucasus pipeline expansion has ended without drama as management fulfilled the main demand, but workers who were fired have not been given their jobs back.

Three days ago, nearly 200 workers protested against a decision by the company to reduce their working hours and thus reduce their salaries. Workers wanted the old working hours, and to be paid for working in weekends and improve the food menu.

The web portal Samkhretis Karibche (sknews.ge) reported Saturday that the three-day protest ended as management agreed to satisfy the workers’ demand, and on December 5 workers went back to work.

As soon as the strike began, 30 workers were fired without explanation. 11 of them have been re-hired, but 19 remain unemployed.

Most of these workers come from either Tbilisi or Rustavi and Gardabani, which are towns near the capital.

Samkhretis Karibche quoted one of them, Koba Naveriani, saying that they were offered to work in Gardabani for the same company, Bekhtel and Enka, which is a contractor for BP.

“They called us who have been fired in Akhaltsikhe today, [and asked us] to come [to Gardabani] and work there. We don’t know what will happen on Monday,” he said.