Strict rules leave rail passengers in Tbilisi for the holidays

Strict rules leave rail passengers in Tbilisi for the holidays 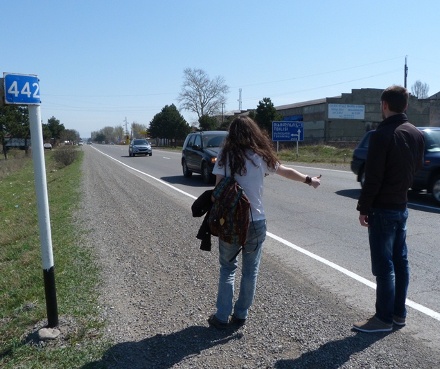 Some are having to hitchhike to get out of Tbilisi for Easter. (Photo: Mari Nikuradze.)

TBILISI, DFWatch – Saturday morning, the day before Easter, there is a large crowd at the railway station in Tbilisi. All of them have bags of luggage and are trying to find their tickets for the train or are buying them.

The Easter holiday lasts four days in Georgia, so people from the regions are going home to their families or some are just visiting their villages to see relatives and to rest for a short time.

Whne DF Watch got to the railway station Saturday morning, all tickets had been sold out for trains to the western regions. People are standing at the cashiers, asking if someone might have returned their tickets or maybe tickets are left to some destination near their village.

Tina (65) is leaving with her husband for Kutaisi in Western Georgia. She has been visiting her son and his family in Tbilisi for a while, but she wanted to go home for Easter. Tickets to Kutaisi are sold out. It costs five lari to take the train to Kutaisi.

Tina is also waiting for someone to return their tickets; hoping that she is lucky.

“I can’t go by any other means of transport. There are no bus tickets, and mini bus is so expansive that I have to pay the rest of my pension for both us to go. I will wait here and then just go back to my son’s and leave after Easter.”

The operator announces that several trains to Ozurgeti, Kutaisi and Poti have arrived. A few minutes later, people start running from downstairs, cursing and shouting. Heading towards the ticket counter, they are digging deep in their handbags and wallets to get their IDs.

It seems most people are not familiar with the strict rules. You are not allowed on the train if the tickets are not made out in your name and with an ID number. This is stricter than before. It used to be possible to buy tickets for others, but now every passenger has to present his or her ID card at the ticket counter.

The trains leave in ten minutes. These people have to return their tickets and buy new ones in their own name. There are lines in front of all five ticket counters. Tina hopes maybe someone forgets their ID and just returns their tickets to Kutaisi, but unsuccessful.

People start leaving, some back to the trains and some in the direction of the taxis and mini buses. Tina also leave with her husband back to her son’s home in Tbilisi. She had no money to go. One 19-year old man named Vakho is late for his train. He is going to Batumi on the Ozurgeti train, which costs six lari. Batumi is a port on the Black Sea. He didn’t have an ID with him and the train just left. He returns the ticket and gets his money back.

“How am I supposed to go now, a student with now money? You know students now and their pocket money. Mini bus to Batumi costs twenty lari. It will literally be fantastic, me paying twenty lari to Batumi,” Vakho says. He was going to visit his friends there for the weekend.

DF Watch left for the mini bus station. People are also crowding here. Drivers are shouting out the names of various regions and villages. Vakho is asking for Batumi, but the price is the same everywhere. He is even ready to stand in the bus for six hours, but no-one agrees to take him for a cheaper price.

“Do you know how much fuel costs? We get nearly nothing from our job and we work on holidays now. It’s impossible,” the drivers keep telling him.

There is another way of traveling from Tbilisi. Ordinary taxi drivers are looking for four people to gather and take them wherever they want. But this way it cost about fifteen lari.

“You should really avoid traveling on celebrations and holidays somewhere in Georgia if you don’t have much money. I think people are buying tickets on trains for a week in advance or something like that,” Vakho thinks. He decided to go hitch-hiking.

It took him six car changes and 8 hours to finally get to Batumi, but he got there entirely without paying.