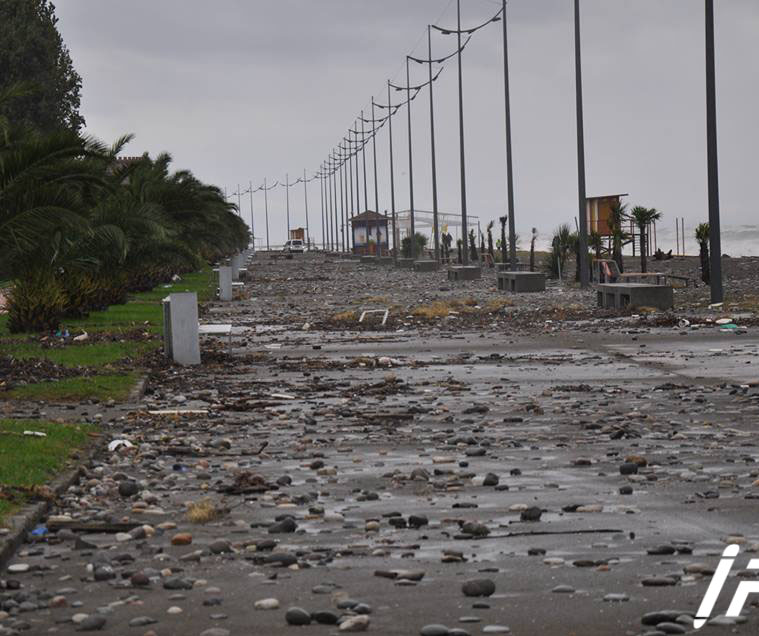 TBILISI, DFWatch–A storm on the Black Sea coast damaged the boulevard in the Georgian resort city Batumi Sunday and caused 400 meters of a running path to collapse.

According to Batumi Mayor Jemal Ananindze, it could cost several million lari to repair the damaged part of the boulevard. He said that the structure of the boulevard is damaged and the storm may continue.

Most of the damage was caused to the coastal side of the city. No-one was injured, but cafes and restaurants on the sea front were affected.

The strong sea waves brought the ferry Smat, sailing under a Maltese flag, ashore. The ferry with 35 wagons left Poti port on Saturday, but the ship lost control due to heavy storm.

According to the captain, the ship is not damaged. The crew is waiting for the weather to improve before going back onboard.

The storm started at 23:30 on Saturday in the Adjara region and lasted several hours. It was raining on Sunday as well.

Strong wind left a five-storey house in Gori without a roof. The wind threw the roof tens of meters away from the building. The roof of the house was mended a few years ago. The local municipality will assign responsibility for compensating the damage to the company which mended the roof a few years ago.