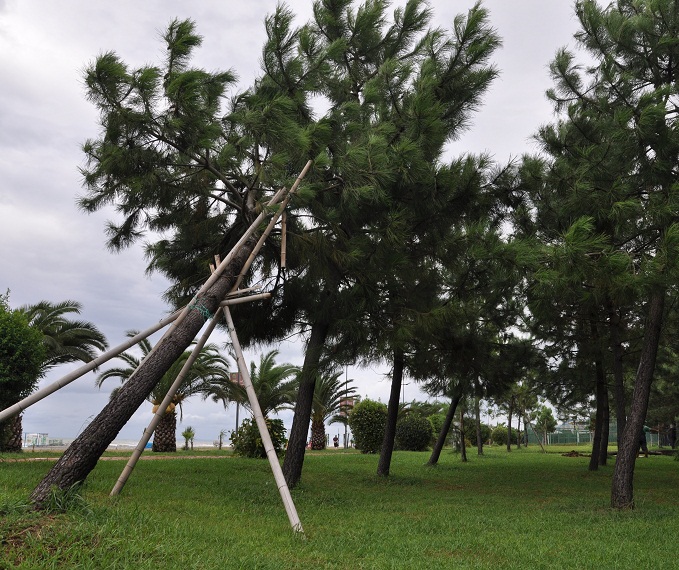 A fallen tree on the waterfront in Batumi. (DFWatch.)

TBILISI, DFWatch–Despite heavy rains and wind in the west of Georgia the last two days, no serious damage was done to villages and towns. But there is still a danger of landslides.

Strong wind and rain caused problems in several regions of Georgia for the last two days.

All military units were on alert and local authorities prepared after the Ministry of Environment and the Ministry of Regional Development earlier in the week sent out a warning that a storm was moving in from the Baltic Sea, even going so far as calling it a cyclone.

But the bad weather had far less of an impact than many had expected.

Still, thick sediment covered western and central Georgia. According to the ministry of environment, the thickest sediment was in the sea town Kobuleti, and in Keda and Chokhatauri further inland, with thickness of layers 106 mm, 90 mm and 72 mm, respectively.

Strong winds were observed on the Black Sea coast, in the Shida Kartli region and in Tbilisi, the capital. Maximum speed of wind observed was from 20 to 25 meters per second in those places.

Water levels rose in rivers in the west of the country, but there is still no alarming situation. In Keda, Ozurgeti, Kobuleti and Batumi the streets, cornfields and agricultural lands were flooded, while in certain areas traffic was blocked by the water.

The Environment Ministry warns that in the coming days there is a danger of landslides.

Locals in Batumi remembered the storm about four months ago, which destroyed Batumi boulevard and damaged the coastline, even though there was no warning ahead of the storm like this time.

For both days, rescue workers and police were mobilized at the beach in Batumi. They were instructed not to let anyone walk close to waves.

Several streets in Batumi, including parts of the boulevard, were flooded, a house-roof collapsed and the wind overturned some trees close to the beach; but no other damage was caused by the storm which lasted for two days.

Weather forecasters say the weather will improve from Friday.