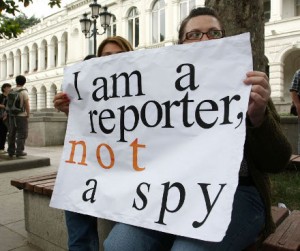 Activists in Tbilisi recollected how four photographers who documented police brutality were accused of being Russian spies in June 2011. (Photo: Interpressnews.)

TBILISI, DFWatch – ‘I am a reporter, not a spy’; ‘we want free media’ – these were some of the slogans seen during a demonstration in Tbilisi Thursday to mark World Press Freedom Day.

The first rally started at 12:00 noon. Protesters symbolically tied their eyes, mouth, chained their hands and placed Georgian magazines and newspapers inside cages. They explained that this was a way of describing what the situation is like today. The demonstration was organized by media organizations and non-governmental organizations (NGOs).

Some of the problems brought up was harassment of media, and how officials are suppressing certain journalists. They also commemorated police brutality of the night of May 26, 2011, when police violently dispersed a mostly peaceful anti-government rally.

The main slogan – I am a reporter, not a spy – refers to the spy charges against four professional photographers who documented the May 25 violence. June 7, they were arrested by the Interior Ministry, accused of being spies. A support campaign was launched, and after two weeks of protesting, the photo-reporters were released. The court sentenced them to suspended sentence in exchange for admittance of guilt – a so-called plea bargain agreement. Since then, the four have made only circumspect comments in public about what happened, and the full truth is not yet known.

At the end of the rally, protesters called on the government to stop the persecution of journalists.