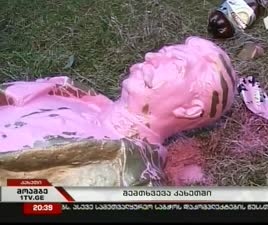 The restored Stalin statue in Akura was torn down and doused with pink paint. (Channel 1.)

TBILISI, DFWatch — Monuments of Joseph Stalin which have been restored in two Georgian villages were bombed with pink paint, torn down, and damaged.

After the change of government, the population in some villages demanded to restore old monuments of Soviet dictator Joseph Stalin, which were taken down during the previous government. Even though the government did not give permission, villagers gathered money to rehabilitate the monuments and in villages in the Kakheti region, statues of the Georgian-born leader were restored.

Now, restored monuments of Stalin have been damaged in Akura and Alvana, two villages in Kakheti.

In Akura, the statue was lying on the ground, doused with pink paint. The locals plan to clean it and put it back up.

In Alvana, the monument was just painted pink. Villagers tell journalists that they suspect that the damage was done by activists from the National Movement party, but they cannot name anyone specifically.

The police is investigating the damage as acts of hooliganism.