Stalin statue to be restored at the museum in his hometown

Stalin statue to be restored at the museum in his hometown 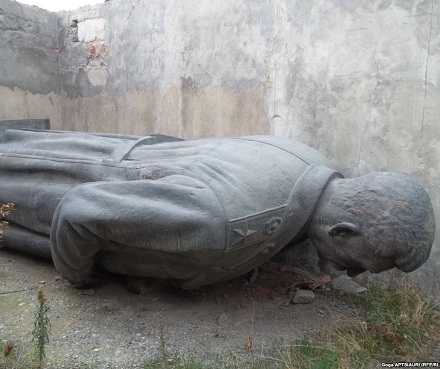 The statue of Stalin has been stored outdoors in a yard since its dismantling in 2010. (Radio Tavisupleba.)

TBILISI, DFWatch–The monument of Stalin, which was removed from the pedestal in the central square in his hometown Gori in 2010, will be restored in the Stalin Museum in the same town.

Georgian government officials deny any notion of rehabilitation of Stalin’s person in this move and argue that Stalinism has no support among Georgians.

The question of what to do with the statue resurfaced after Gori municipality decided to restore the monument and asked for recommendations from the Culture Ministry about where to place it.

Representatives of the Culture Ministry told DF Watch that this is not an issue for the ministry to decide and is the prerogative of the local government. Therefore, the ministry advised them to locate the statue at the Stalin museum. Ministry representatives think this might be an important tourist attraction.

Zurab Karumidze, chairman of the foreign relations department of the government office, told DF Watch that since 2005 it has supervised museums and decided to change the scope of the Stalin Museum and rename it the Anti-Stalinism Museum. The statue of Stalin will also be placed there and this way it won’t be a symbol of appreciation to the statue and Stalin.

National Movement members say that restoring the Stalin statue is an expression of declining Western values, but Ivanishvili’s government categorically denies this, saying that the statue may only be repaired in order to develop tourism.

The statue was demolished in June 2010 despite protests among the local population. Even though there is a negligable number of communist supporters in Georgia, Stalin himself remains popular in his birthplace Gori.

In the town, which was briefly occupied by Russian troops during the war in August, 2008, the city council decided to remove the monument in 2010. However, fearing the outrage of locals, it was dismantled at night, without prior public debate and notification, and placed in a suburb of Gori.

In December 2012, Gori municipality, which was then staffed by National Movement members, made a decision to restore the statue and released money for doing this in the 2013 municipal budget.