Stalin bust erected in Gori, then paint-bombed and dismantled

Stalin bust erected in Gori, then paint-bombed and dismantled 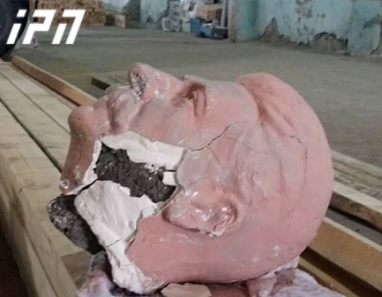 TBILISI, DFWatch–A bust of Stalin was paint-bombed pink and later dismantled in the village Ateni in Gori, the hometown of Joseph Stalin, on Monday.

The bust of Stalin was erected for the 71th anniversary of victory over fascism, on May 9. It was dismantled by Gori municipality.

Two Ateni villagers erected the bust at the most visible and elevated spot in the village. They claim to have received it as a present from someone in Tbilisi who is ‘in love with Stalin.’

December 25, 2013, amendments to the administrative code and the freedom charter came into force, which aimed to eliminate communist ideology through a ban on the public display of its symbols.

According to the amendments, a special commission at the Ministry of Internal Affairs is entitled to issue decrees about eliminating Soviet symbols. In case of disobedience, local governments will first be issued a warning, and then a 1,000 laris fine. The law doesn’t apply to individuals.