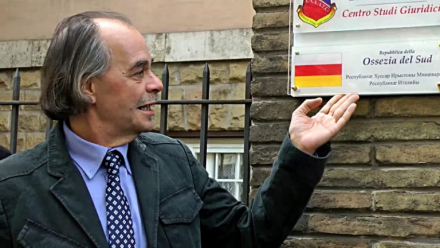 Mauri Murgia runs the “diplomatic representation” out of a flat in Rome. (Facebook.)

TBILISI, DFWatch–South Ossetia’s “ambassador” to Italy says that “the time has come” for recognizing its independence.

“We believe that the time has come that Italy through its current government recognizes the republic of South Ossetia as a state equal to all states present to the UN,” “ambassador” Mauro Murgia wrote on Facebook.

The statement concerns all European nations that honor civil coexistence and “the rights of peoples to decide their future”, Murgia’s statement reads.

South Ossetia is a tiny strip of land that broke away from Georgia in the early 1990s but has failed to achieve widespread recognition. Murgia’s office in Rome is described as a “diplomatic representation” and was endorsed by a separatist representative in 2016 but isn’t recognized by official institutions. However, Murgia’s activities have resulted in several towns and villages establishing contacts with Tskhinvali.

In June, Italian weekly magazine l’Espesso published a story titled “A strange ambassador recognized only by the Northern League”. Deputy PM Matteo Salvini, who heads the right-wing populist party and ruling coalition member Lega Nord, is known for wearing Putin T-shirts and voicing support for the policies of the Russian president.