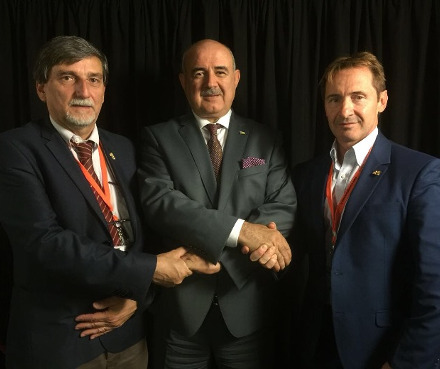 TBILISI, DFWatch–The Georgian breakaway region claims it opened an official representation in Catalonia during a visit by its unofficial foreign minister. Georgia rejects the claim and says the visit was purely private in nature.

Georgia’s Vice Consul in Barcelona asserts that the visit to Barcelona by Dimitri Medoev (pictured, center) was ‘a private travel by private persons’ and the ‘no official representation was ever opened’.

Speaking to DFWatch, the vice consul said he has scrupulously checked the information circulated about Medoev’s visit and found out that there was no meeting and communication with state agencies or officials in Barcelona.

“Even they’ve acknowledged that met with ethnic Ossetian compatriots. It is clear that this was not a ‘visit’, as they want to sell it. It was a private trip. No ‘representation’, which has something to do with diplomatic missions, can be established. The Kingdom of Spain does not recognize the Tskhinvali and Sokhumi occupation regimes and these two regions are considered as an integral part of Georgia, ” Vice Consul Lika Akhalbedashvili said.

Information on the arrival of Dimitri Medoev, the separatist government’s de facto minister of foreign affairs, to Catalonia, was released on October 24 by a Tskhinvali-based news agency.

Medoev said at the meeting with compatriots that the processes in Catalonia stir interest in South Ossetia because 26 years ago “the people of South Ossetia have resorted to similar political steps to establish their own statehood.”

The de facto foreign ministry says that on October 23, “Open Office of the Ministry of Foreign Affairs of South Ossetia opened in Barcelona”, which should intensify cultural and humanitarian relations.

Dimitri Medoev traveled to Venice, Rome, Verona, Florence, Pesaro and the Republic of San Marino on Oct. 14-22 October. It was a working visit and South Ossetia intends to expand geography and establish contacts in the countries with significant Ossetian diaspora, Medoev says. He was invited by Alberto Drudi, Chairman of the Chamber of Commerce and Industry of Pesaro and Urbino province, Medoev said.