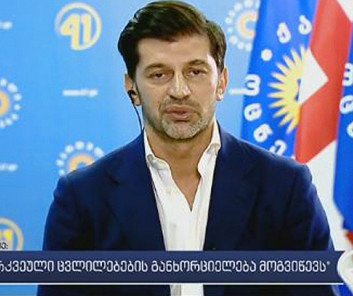 TBILISI, DFWatch–Former AC Milan football player and Georgia’s current vice Prime Minister Kakha Kaladze has won a decisive victory in the election for Tbilisi mayor with 54 percent of the votes, according to an exit poll at 6pm.

The exit polls was carried out by Edison Media Research.

The poll shows Zaal Udumashvili of United National Movement in second with 16 percent, while independent candidate Alexandre Elisashvili is in third place with 14 percent of votes.

Nationwide, the ruling Georgian Dream was even more successful obtaining 58 percent of overall votes. United National Movement got 16 percent; European Georgia got 9 percent and Alliance of Patriots 5 percent. All other parties failed to achieve 4 percent, the electoral threshold.

Georgia held local elections of Saturday. Voters were electing over 2,000 members of 64 city councils (Sakrebulo) and 64 city and town mayors.

The ballot was overseen by 196 OSCE observers as well as hundreds of observers representing other international and local NGOs and political parties.