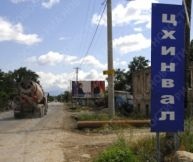 TBILISI, DFWatch–South Ossetia may open its border with Russia and even seek some form of closer association, the breakaway region’s leader says.

de facto president Leonid Tibilov said Wednesday that a ‘treaty of collaboration’ with Russia is likely to be signed in the beginning of 2015.

“I had a proposal that the future treaty was reviewed in the range of direct entry of the Republic of South Ossetia to Russia to other forms that exist today in the world.”

Tibilov said there are many forms of political coexistence of states and he thinks they will soon find an answer to this question.

News Agency of South Ossetia Res quotes him saying that there are number of proposals considered about the treaty, specifically with Oleg Govorun, who is Head of the Presidential Administration of Cooperation with the CIS (Commonwealth of Independent States) countries, de-facto Abkhazia and South Ossetia, who recently visited Tskhinvali.

“In the basis of the future treaty lies also the question of the border regime between Russia and South Ossetia,” he said. “There is hope that Russia will meet us on the issue of withdrawal of the checkpoint in Lower Zaramag.”

The proposal to join Russia is not new, as many people in South Ossetia want the region to be joined with North Ossetia, which is an autonomous republic within the Russian Federation.

A few weeks ago, Russia signed a treaty on alliance and strategic partnership with Abkhazia, which Georgia considered an attempt at annexation.

Foreign Ministry spokesperson Davit Kereselidze, says the government expected Russia to sign the same type of treaty with South Ossetia as it did with Abkhazia. Georgia is now in the process of informing the international community.

“Of course Tibilov’s statement today is concerning and contains threats,” he said. “We want to point out that this is a destructive statement from de facto Tskhinvali government as well as from Russia.”

He also said that the only means Georgia has is to get the attention of international community.

President Giorgi Margvelashvili said Georgia knew Russia would sign the treaty with Tskhinvali, but Tibilov’s statement is ‘completely unacceptable’ and the government has stepped up efforts together with the international community.

“The international community is aware that in parallel with the Abkhazian problems, the same problem would appear in Tskhinvali,” he said, adding that the treaty signed with South Ossetia won’t make the Russian ruble stronger or increase oil prices.

“Those issues cannot be solved by signing a treaty with Tskhinvali,” he continued.

The future of Georgia, Russia, Abkhazians and Ossetians, he said, is in the composition of Georgia and the problems must be solved with Georgia through dialogue and constructive cooperation.