Rallies in Tbilisi and Batumi in support of jailed Azerbaijani journalist

Rallies in Tbilisi and Batumi in support of jailed Azerbaijani journalist 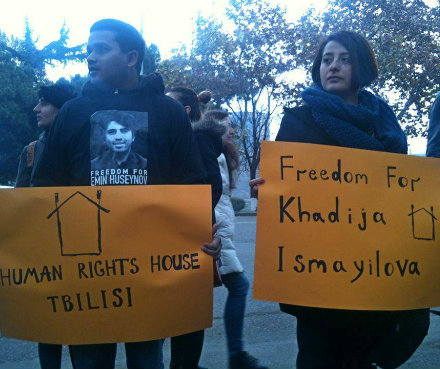 TBILISI, DFWatch–Two demonstrations were held in Georgia Wednesday in support of the Azerbaijani journalist Khadija Ismayilova, who was recently detained.

Ismayilova was placed in preliminary detention in Baku on December 5, after being subject to a travel ban earlier this year.

She is charged with causing someone to attempt suicide, which is punishable with from three to seven years.

Through her lawyer, she says the charges are absurd and are related to her work as an investigative journalist.

Many prominent regime critics have been jailed in recent months in a broad crack-down on dissidents.

Ismayilova is one of the leading investigative journalists in the country, writing especially about corruption, whose work to expose the business dealings of the family of President Aliyev has been an irritation for the regime and have been picked up by large media like the Washington Post, reaching a worldwide audience.

Georgian journalists and human rights activitists, gathered in front of Azerbaijani embassy in Tbilisi. There was also a demonstration in Batumi.

Some of the posters read: “Freedom for Khadija Ismayilova”, “Our liberty depends on the freedom of the press and that cannot be limited without being lost”, “Azerbaijan government respect human rights law!”

Demonstrators handed the embassy an appeal which calls on the government of Azerbaijan to respect international human rights laws and stop the persecution of its opponents.

The consular office of Azerbaijan in Batumi did not accept the protesters’s appeal.

The latest problems with the authorities began for Ismayilova after she allegedly handed over documents to representatives of the U.S. Senate in February, 2014, which led to the government accusing her of being an American spy. She was prevented from leaving the country in fall, and was sued for slander of someone she identified as an informant for the domestic intelligence.

One day before the journalist’s detention, President Ilham Aliyev’s head of administration published a long article in which non-governmental organizations financed from abroad, and particularly Radio Liberty, are branded as agents of foreign governments meddling in the country’s internal affairs. The article describes Radio Liberty’s activities as ‘treason’ and specifically singles out Ismayilova, one of the station’s radio hosts.