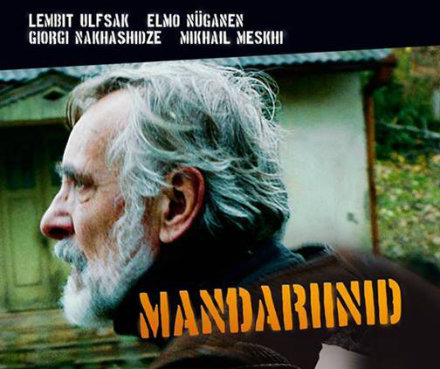 TBILISI, DFWatch–A film by a Georgian filmmaker has been nominated for a Golden Globe award.

Tangerines, or Mandariinid, is a Georgian-Estonian production written and directed by the Georgian Zaza Urushadze. Producer of the film is Ivo Felt and it starrs Georgian and Estonian actors.

Tangerines was filmed in 2013 with a budget of 650,000 euros. It was financed by Eurimages – European Cinema Support Fund and Georgia’s National Cinema Center. The film is nominated in the category Best Foreign Language Film, representing Estonia.

It is set in the time of the Abkhazian war, and shows the life of Estonians in the region who didn’t leave their homes despite the war. It shows the relationship between wounded Georgian and Chechen soldiers sheltered in a house of an Estonian man in Abkhazia.

The film was made by Estonian movie studio Allfilm. It has already won a number of awards, including Best Estonian Film by Tallinn Black Nights Film Festival, Best Director Award of Warsaw International Film Festival.

At the Golden Globe awards ceremony, which will be held January 11, Tangerines will be competing with Force Majeure (Sweden), Gett: The Trial of Viviane Amsalem (France), Ida (Poland) and Leviathan (Russia).