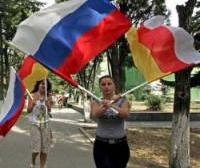 Tbilisi, DFWatch – The de facto leadership of South Ossetia issued a statement saying that the referendum on joining Russia would be conducted in 2017, instead of, as previously planned, in August this year at latest.

Earlier this year, Moscow sent mixed signals to the government in Tskhinvali, which were interpreted as Russia’s lack of willingness to formally incorporate, or annex, South Ossetia into its territory.

Georgia, which considers South Ossetia a part of its territory under Russian occupation and considers the de facto South Ossetian authorities as illegitimate, has repeatedly expressed its discontent with the process. The Deputy Spokesperson of U.S. Department of State, Mark Toner, reaffirmed the American support for Georgia’s claim to the territory.

The Chairman of the Foreign Affairs Committee of the State Duma, Aleksey Pushkov, wrote on his Twitter account that the opinion of the U.S. was irrelevant.

‘The U.S. doesn’t support the idea of a referendum on South Ossetia joining Russia. It’s another case when the American opinion is of no importance’, Mr Pushkov wrote.