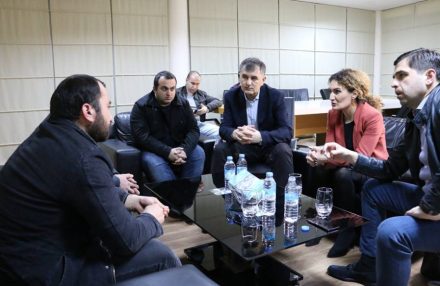 TBILISI, DFWatch–Separatist authorities in control of the South Ossetia region Sunday released two Georgian men who were detained about three weeks ago, but still refused to hand over the body of a third detainee who died in detention.

Levan Kutashvili and Ioseb Pavliashvili were detained on February 22 in Akhalgori – a part of South Ossetia that has been under separatist control since the 2008 war. The third man, Archil Tatunashvili, died in Tskhinvali after a physical confrontation with prison guards.

Despite numerous appeals both by the family of the deceased and Georgia’s central government, as well as civic activists and international organizations, Tskhinvali regime has until now resisted calls to release the two and handing the body over to the family.

Kutashvili and Pavliashvili were escorted to the administrative border between the breakaway republic and Georgia proper and turned over to representatives of the Georgian government. Ketevan Tsikhelashvili, State Minister for Reconciliation and Civic Equality, and Sozar Subari, Minister of Refugees, met the two at the administrative border. Representatives of  the Ministry of Internal Affairs and the State Security Agency were also present.

“We hope the body of Archil Tatunashvili will soon be handed over,” Tsikhelashvili said, as quoted by Interpressnews.

The two are residents of Akhalgori and were released soon after the death of Tatunashvili but stripped of their identity documents and therefore not able to leave South Ossetia.

Tatunashvili, a retired member of the Georgian military and veteran of international missions in Iraq and Afghanistan, died in Tskhinvali in the early hours of 23 February from ‘acute heart failure’. Tskhinvali referred to Tatunashvili as a person possibly implicated in ‘the genocide against the Ossetian people’, a label commonly applied to people who participated in the Russo-Georgian war in August, 2008.

The de facto authorities claim he was injured when he tried to resist the guards. However, few, if any, believe in this version, and the suspicion of foul play has been strengthened by the fact that de facto authorities has defied all appeals to hand over the body to the family so that another forensic examination could be carried out.