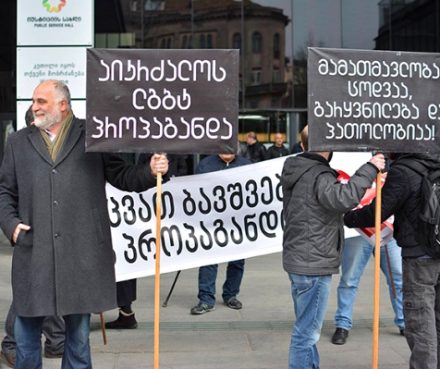 Guram Palavandishvili was detained for throwing a raw egg. (Interpressnews.)

Police detained one person for throwing a raw egg at the group of LGBTQ protesters who had gathered outside the House of Justice to demand smoother procedures for registering a sex change.

The counter demonstrators, who were from groups that believe LGBTQ rights are a threat to family values, threw eggs and shouted swear words at the transgender rights activists.

One person, the leader of the radical group Orthodox Parents Union, was detained by the police and released later that day.

The transgender rights activists rallied outside the House of Justice to demand easier procedures for changing one’s gender in identity documents. The several dozen conservatives activists were gathered nearby for a counter rally.

Dozens of police officers were dispatched at the scene in order to prevent physical violence. Unable to thwart the gathering, the counter-rally organizer Guram Palavandishvili threw at least one raw egg at the supporters of transgender rights and was immediately detained for petty hooliganism.

Palavandishvili, Tbilisi based entrepreneur, has become notorious in Georgian politics for his homophobic and radical rhetoric. He is affiliated with Nino Burjanadze’s political party, Democratic Movement, and was a candidate for the party in the election for Tbilisi city assembly in the 2014 local elections.