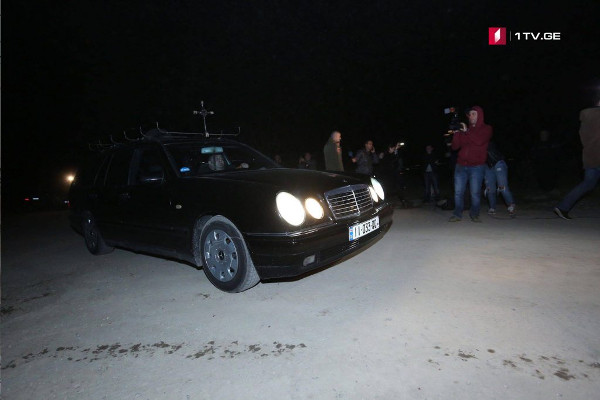 The car with the body of Archil Tatinashvili crossing into Georgia proper near Akhalgori. (1tv.ge.)

The release of Archil Tatunashvili’s body was facilitated by the Red Cross. The former member of the Georgian army died on February 23 after a confrontation with the guards at Tskhinvali prison, where he had been detained on ‘terrorism’ charges. Tskhinvali also accused him of participating in ‘the genocide against the Ossetian people’, a label commonly applied to people who participated in the Russo-Georgian war in August, 2008.

Tskhinvali insists that Tatunashvili died due to heart failure, while his family and Tbilisi authorities suspect that he was tortured to his death. The suspicions have been aggravated because the de facto authorities have refused to release of his body for almost a month.

The body was transferred to Tbilisi in order to conduct a thorough forensic examination to determine the real cause of death. The examination will be concluded as soon as possible and afterward, the body will be handed over to the family, Georgian officials said.

“This evening, we received the body of Archil Tatunashvili with the facilitation of the Red Cross. The examination will be conducted at Levan Samkharauli National Forensics Bureau, after which [the body] will be transferred to his family in Tsilkani. We would like to state that this tragic event will inevitably be properly investigated,” spokesperson at the Office of State Minister for Reconciliation and Civic Equality said to DFWatch.