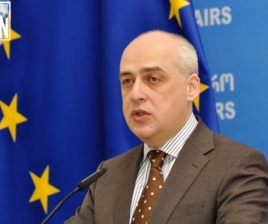 TBILISI, DFWatch–The parliamentary election in South Ossetia Sunday was soundly won by a political bloc which wants the breakaway region to join the Russian Federation.

The party Edinaya Ossetia, or United Ossetia, has union with Russia as a ‘preliminary’ goal, and reunion with North Ossetia, a Russian autonomy, as its final and most important goal.

Edinaya Ossetia, a party led by an ally of the former president Kokoity, Valeri Bibilov, won, according to preliminary results about 43 percent and will get 20 of the 34 seats.

There are 46,000 voters in the region and turnout was over 60 percent, according to the de facto government.

In a preliminary statement the mission says the elections were held in keeping with international standards and in an atmosphere of political pluralism and freedom of expression, according to South Ossetia’s government-run news agency RES.

Edinaya Ossetia ran a campaign on a promise to hold a referendum on joining Russia. In its five steps program, the first two are to initiate and to conduct a referendum on acceding to Russia. Then the parliament will ask Moscow to accede, and the remaining steps are a working process to rewrite the constitution and legislation. This requires support from all the deputies, according to RIA Novosti’s Mikhail Sheynkman.

Almost all the parties made a similar election promise, according to political commentator Dimitry Medoyev.

Mamuka Areshidze, who works on Caucasus issues, told DF Watch that this is a ‘new trend’ in the policy of Tskhinvali.

But Alexey Malashenko, from Moscow-based Carnegie Foundation told Radio Freedom, ‘this idea [of Ossetian reunion in the Russian Federation] has always been present, and it seems it will so be in future too. However, to realize it will take quite a long time, if ever.’

Paata Zakareishvili, State Minister for Reconciliation and Civil Equality says that ‘this is a signal from Tskhinvali and there hasn’t been any response from Russia.’ He thinks that it is still necessary to observe the situation and not panic.

Although Tbilisi eyes with caution developments in South Ossetia, it seems no-one in Moscow will seriously weigh a ‘Crimean scenario’ in South Ossetia; that the region is annexed into Russia justified by a popular vote.

However, Malashenko said that while Moscow’s financial support to Abkhazia has been gradually diminishing, it recently announced an ambitious plan to subsidize South Ossetia with USD 230 million during next three years. Abkhazia with its 3,5 times larger population than South Ossetia, receives annual subsidies that in 2013 amounted to about USD 55 million.

A few weeks ago, pro-Russian politicians and a large crowd of their supporters gathered in Sokhumi and ousted the Abkhaz president Alexander Ankvab. Their slogan was ‘closer ties’ with Russia. In the upcoming snap elections to find a replacement for Ankvab, it seems Raul Khajimba, a former KGB officer, is set to win overwhelmingly.

South Ossetia and Abhazia broke away from Georgia in the early 1990s but have mostly failed to achieve recognition as independent states, except for Russia and later Venezuela and Nicaragua recognizing them following the 2008 Russia-Georgia war.