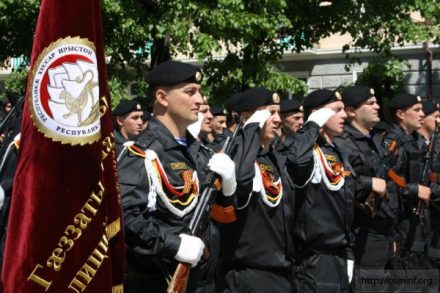 TBILISI, DFWatch–South Ossetia has imposed strict security measures in Akhalgori, the only part of the breakaway republic inhabited predominantly by ethnic Georgians.

Units of the region’s riot police have been deployed to the town of Akhalgori and its surroundings.

The new development was first reported by Radio Liberty on Saturday and later confirmed by locals who DFWatch spoke to.

Units from a special police force called OMON (Special Police Detachment) are deployed inside the town, where they are stopping and checking the documents of almost every male, mostly ethnic Georgians, especially young people. Some adolescents have been taken to the police station for further questioning, locals told DFWatch.

OMON forces are also carrying out stop-and-search of almost every car, especially those crossing a checkpoint at the administrative border between Akhalgori district and Georgia proper.

Members of the riot police tell locals that there are special security measures in place related to the upcoming presidential elections in Russia and ‘possible provocations’, Radio Liberty reports.

A native of Akhalgori who had served in the Georgian military, Archil Tatunashvili, was arrested by Tskhinvali forces on February 22. The following day he was pronounced dead. His relatives and many Akhalgori inhabitants are confident that he was beaten to the death by prison guards. Later the breakaway authorities accused him of being involved in the ‘genocide against Ossetian people’, a phrase used by the de facto authorities about the 2008 war. Breakaway authorities insist that the forensic examination found no signs of physical abuse on the body, but still refuse to hand it over to Georgia for additional examination despite continuous demands by the family, further fueling suspicions of foul play.