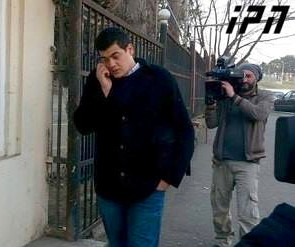 TBILISI, DFWatch–The son of a former opposition politician in Georgia was Monday officially charged with having assaulted the director of the largest opposition TV channel.

The suspect Rati Gachechiladze (29) pleaded guilty and was released on 5,000 laris (USD 1,800) bail. He may face imprisonment for up to two years or administrative penalties, if found guilty of violence and physical assault.

Rati Gachechiladze is accused of having attacked Nika Gvaramia, director of Rustavi 2, a television channel sympathetic to the UNM.

His father, Levan Gachechiladze, is director of Maestro TV, which has been regarded by many as a pro-government TV station.

The defendant’s lawyer emphasized that the incident was not a crime or political revenge, but “a spontaneous reaction of a drunken boy and the case couldn’t be qualified as a criminal offense.”

“Because there were one or two blows, my client shouldn’t face criminal charges,” the lawyer said.

The brawl took place on January 8, when Gvaramia was about to leave the restaurant Dining Room after having met his friends, including popular theatrical director Dato Doiashvili and musician Marina Beridze. A few hours earlier, Gvaramia had buried his father. Suddenly the electricity in the room was cut and someone attacked him and his friends in the dark. A man later identified as Rati Gachechiladze beat Gvaramia on the head and made him fall to the floor. The incident took place on Saturday, which was Christmas Day according to the Orthodox calendar.

“This incident… was my reaction to the physical and moral abuse which I and my family have suffered by Gvaramia in previous years … Nobody took part in the incident but me alone! Obviously, I did not know about his father’s death… I’ll come to the [police station] today, with my lawyers,” Rati Gachechiladze posted on Facebook.

Following his statement, he handed himself over to the police.