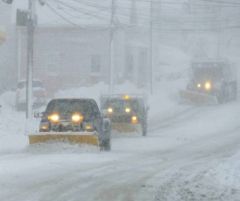 TBILISI, DFWatch–Traffic is prohibited on the Gudauri-Kobi section of the road from Mtskheta to larsi via Stepantsminda due to the avalanche danger.

The Environment Ministry warned about possible avalanches in this section of road. According to the Road Department, trailers and vehicles with more than 30 seats are not permitted to drive on the Mleta-Gudauri and Kobi-Larsi sections, due to snow and frost. Other types of vehicles are allowed to drive provided they have snow chains.

There are the same restrictions on the road Zugdidi-Jvari-Mestia-Lasdili’s, on the 102km-182km section.

The weather has also worsened in the Adjara region on the Black Sea coast, where there was a storm this morning which destroyed the rescue watch booths, the yacht club piers, and the walking path along Batumi Boulevard.

The Ministry of Environment warns about a frost of a scale which Georgians are not used to.

According to a ministry statement, the temperature in Georgia, especially in the eastern part, may fall to below minus 10 degrees Celsius.

The weather will get worse in the beginning of February. Minus 15 degrees is expected in the capital and in the mountainous regions, the temperature is estimated to be between 17 and 22 below zero.

“This type of weather is rare in this period of the year, but it is not an anomaly,” the statement reads, continuing that Georgia has experienced the same weather in February five times from 1970 to 1990, and three times in the 2000s, and in 2012.