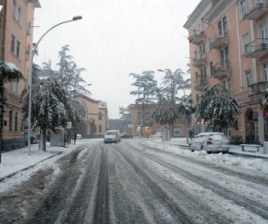 TBILISI, DFWatch–155 000 households are left without electricity in Georgia, according to the Energy Ministry.

Deputy Energy Minister Irakli Khmaladze said at a briefing that the bad weather has created problems mainly in the regions in the west of Georgia, and that the damage is caused by snow and blizzard.

“The damaged sections have been found and we have initiated repair work,” he said, adding that the municipalities Khulo, Keda, Baghdati and Vani are completely without power supply.

The Energy Ministry promises that the repair work will continue 24 hour a day until electricity is restored.

No problems have been noticed in the capital, he said.

In a statement the company said the bad weather has damaged twenty-two 110 kW and 35 kW transmission lines and 130 electric transmission poles.

Trailers are prohibited from driving through the Rikoti pass, which connects western and eastern Georgia, due to the snow.

The Road Department said there are further restrictions on the road section Mtskheta-Stepantsminda-Larsi, where trailers and vehicles with more than 30 seats are prohibited from driving.

There are now avalanche protective tunnels in operation along the Gudauri-Kobi section.

Trailers are also prohibited from driving the 135-228 km road section Tbilisi-Senaki-Leselidze, as well as the section Gomi-Sachkhere-Chiatura-Zestaponi in western Georgia.

Traffic is flowing freely on the central highways.