Small landslide in village near Tbilisi, origin of catastrophic flood

Small landslide in village near Tbilisi, origin of catastrophic flood 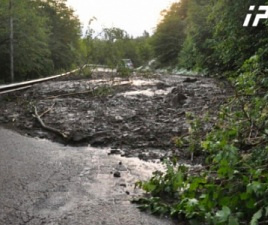 TBILISI, DFWatch–There was a small landslide this morning in a village near Tbilisi, the same place where a landslide caused a catastrophic flood wave in a river valley June 13.

A landslide in Akhaldaba was what caused the disaster in Vere Valley in Tbilisi which led to at least 19 deaths, while three people remain missing.

This morning’s landslide was smaller and caused no damage to houses. The road has already been cleared.

Interpressnews quotes Kaztransgaz Tbilisi, which supplies gas to households, saying that a pipe was seriously damaged and gas supply was cut off.

The same pipe was destroyed on June 13-14, but repaired a few days later. The company will begin repairing the pipe as soon as the clean-up work is completed.