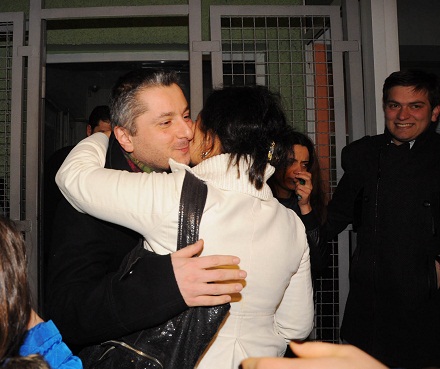 Director of the TV company Rustavi 2 Nika Gvaramia said that the accusations were poorly prepared and politically motivated. (Interpressnews.)

TBILISI, DFWatch — Six suspects in a corruption case involving a one million dollar bribe, a dummy company and three power stations were Saturday released on bail.

The two most high profile names among the suspected conspirators are Nika Gvaramia, former education minister and current head of the TV station Rustavi 2; and Alexandre Khetaguri, former energy minister and finance minister.

“I cannot understand why I am here and with such serious accusations. I was carrying out my duty and I helped my friend establish a company. If this is a crime, you can prohibit me from leaving, because there have been many such cases in my life,” Gvaramia said after his release.

Investigators in Georgia’s Finance Ministry, who were assisted by the Chief Prosecutor’s office and the Energy Ministry, claim that Gvaramia, Khetaguri and other former government officials colluded with the Russian power company Inter RAO, which owns considerable assets in Georgia, in order to let three power stations — Khrami-1, Khrami-2 hydro power stations and Mtkvari thermal power plant — avoid taxes in the amount of tens of millions of lari by not conducting a tax audit. In return, the government officials would be paid one million dollars in bribes. The money was funneled through a dummy company — L & F Service — apparently selling consultancy services to Telasi. In order to prevent the energy company’s internal auditors from discovering the transaction, documents were forged and dated back in time, according to investigators in the Finance Ministry.

The case has caused an outrage among supporters of the National Movement party, with all its representatives in the national assembly laying down work in protest at what they argue is political persecution. President Mikheil Saakashvili said in a live TV speech Thursday night that it was ‘unimaginable’ that the head of a TV station is arrested. Prosecutors have said that the things Gvaramia is suspected for are unrelated to his current job at Rustavi 2. UNM Friday mobilized over a thousand supporters outside the main police station in Tbilisi, and also at Rike park in Old Tbilisi.

Saturday, Tbilisi City Court heard the case to decide whether the suspects should be held in pre-trial custody. All six were set free on bail until the trial, which is scheduled for January 31, 2013. Khetaguri and Gvaramia must pay USD 18 000. The same bail was set in the case of Kakha Damenia and Devi Kandelaki, who are in the management of Telasi. Bail was set at USD 9 000 for Giorgi Nemsitveridze and Izabela Gutidze, the two who allegedly set up the dummy company.

The term of payment is 20 days. Gvaramia, Khetaguri, Damenia, Kandelaki and Nemsitsveridze quickly paid the bail and left the prison, where their relatives were waiting for them at the entrance.

The accused told journalists that they do not admit guilt. Iza Gutidze, a sixth detainee apprehended later then the rest, left the women’s prison later on Saturday.

Nika Gvaramia, the director of Rustavi 2 TV, and a former education minister and deputy chief prosecutor, said before today’s hearing that the accusations are poorly prepared and politically motivated. He thinks the Ivanishvili government is trying to implicate former Interior Minister and current National Movement party secretary Vano Merabishvili in something criminal. Another reasons for his detention, he claims, is to harass Rustavi 2.

“Rustavi 2 will remain as it is, with or without me.”