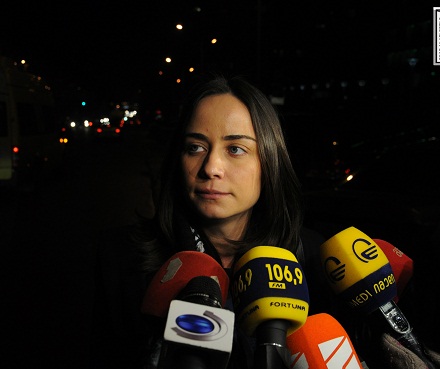 Former Justice Minister Zurab Adeisvhili was also called in for questioning in the same case, but didn’t show up. His current whereabouts are unknown, but it is known that he left the country after the election in October and has not returned since.

There has been considerable criticism against the manner in which Cartu Bank ended up in bankruptcy proceedings last year. In October 2011, when the bank was owned by billionaire Bidzina Ivanishvili, it suddenly experienced a raft of legal troubles soon after he announced that he wanted to found a political party and challenge President Saakashvili in the parliamentary election. Both among opposition quarters and in wider society many saw the bank’s strange and sudden problems — which included a money transport being raided by armed police — as a deliberate plan by Saakashvili to run the bank into bankruptcy.

In the end, Cartu managed to escape bankruptcy.

In a nationally televised briefing Thursday night, Mikheil Saakashvili said that if he had wanted the bank to go bankrupt, ‘one word would have been enough.’

Three days ago, the interior ministry published details of the scheme by which the bank was supposed to be driven into bankruptcy.

According to the ministry’s account, what happened was that in the beginning of November 2011, former Justice Minister Zurab Adeishvili called Jaba Ebanoidze, Former Head of the Revenue Service, to his office, introduced the plan to run Cartu Bank bankrupt and told him to carry it out. Jaba Ebanoidze instructed Jaba Lashkhia, chair of the audit department at the Revenue Service, and Otar Agladze, Deputy Chair of the chief department, to carry out the plan.

They in turn contacted several businessmen who were close to officials in the Saakashvili government and who had large liabilities to Cartu Bank. Among the companies were some belonging to Iago Chocheli, the governor of the Mtskheta Mtianeti region, relatives of Erekle Kodua, head of the Criminal Police Department in the Interior Ministry, as well as businesses belonging to Giorgi Isakadze, President of Georgian Small and Medium Enterprises Association.

The Interior Ministry claims that each company admitted having tax debt, after agreeing with officials of the Revenue Service. The National Enforcement Bureau then held a fictitious auction purporting to be forced sale due to tax debt, but in fact none of the properties were sold. Instead, they were transferred to the Economy Ministry, and following a decree by the president, they were sold through direct sale.

In the beginning of 2012, former Justice Minister Zurab Adeishvili personally instructed Economy Minister Vera Kobalia’s deputy, Davit Giorgadze, to give the properties to certain companies, to be specified by the Revenue Service. This way he sold the properties to individuals who directly or indirectly were related to the former owners of the same properties.

According to the interior ministry, Jaba Ebanoidze, Mamuka Lashkhia, Otar Agladze, Davit Giorgadze and the businessmen have been cooperating with law enforcement and provided investigators with an extensive amount of information about the illegal scheme.

“The evidence and testimony in the case confirm that high ranking officials in the former government were organized and acted in consent to fulfill this criminal scheme which was aimed at bankrupting and causing financial damage to Cartu Bank,” the ministry’s statement reads. “In particular, the Georgian Parliament, and the ministries of Justice, Finance and Economy, including subordinated bodies and units, were involved in the mentioned crime scheme.”

Zurab Adeisvhili did not show up to give testimony at the prosecutor’s office.

Former Economy Minister Vera Kobalia gave testimony on Friday. She told journalists afterward that she was questioned as a witness regarding the investigation of Cartu Bank’s bankruptcy. The questioning lasted four hours. Kobalia said she had hoped to be allowed to go home earlier, because she is in the middle of a difficult pregnancy.

“The investigation is ongoing, and I want to avoid disclosing specific details at this stage,” she said.

Kobalia showed up for questioning together with her lawyer Gogita Gabaidze, who told journalists that there were too many ‘meaningless questions’ during the interrogation. He did not exclude that his client might be asked to give further testimony in the same case.