Six detained in clashes outside parliament in Tbilisi

Six detained in clashes outside parliament in Tbilisi 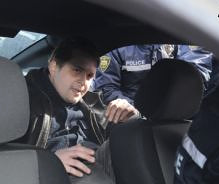 TBILISI, DFWatch–Six people were detained during clashes at a rally against the government’s economic policy outside the old parliament building in Tbilisi on Thursday.

Free Zone, an activists group which supports the National Movement, demonstrated against the government’s economic policy against the background of the monetary crisis in recent months.

They were confronted by the youth movement Free Generation, which supports Georgian Dream coalition.

At a committee session today, MPs listened to reports from the economy minister and finance minister, as well as head of the National Bank.

National Movement members Giga Bokeria and Goka Gabashvili were leaving the parliament building when members of Free Generation began arguing with them. The situation turned into a physical confrontation. As a result, six Free Generation members, including the group’s leader Lado Sadghobelashvili, were detained.

Participants of the rally from Free Zone and others brought posters with messages demanding from government to step down. Free Zone were also there to demonstrate against the government’s wish to return to using the old parliament building in Tbilisi as the official parliament. They think it is a violation of the Constitution that the old building is used for committee sessions.

Committee sessions are being held in Tbilisi, but plenary sessions are still held in the new building in Kutaisi, the construction of which was an idea by former President Saakashvili. The reason is that the new ruling coalition doesn’t have enough seats in parliament to amend the Constitution, so it still says that Kutaisi is the location of parliament.

Two persons were later detained in Batumi for verbal abuse and disorderly conduct during a demonstration outside the National Movement office there.

Activists from Free Generation told Interpressnews that they were demonstrating in solidarity with the six who were detained in Tbilisi.

A National Movement spokesperson said the government’s satellite group is trying to discredit the party ahead of the March 21 rally.