Show of support for anti-homophobia demonstrators

Show of support for anti-homophobia demonstrators 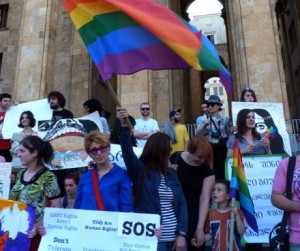 During the show of support Friday, a church congregation was inside the church across the street. The day ended with one minor incident. (Photo: Mari Nikuradze.)

TBILISI, DFWatch – After peaceful demonstrators against homophobia were beaten by counter-demonstrators Thursday, people gathered in front of parliament building on Friday to protest the incident.

“I’ve seen footage of yesterday’s gathering on TV and I’ve clearly seen that the group of people, who within the frames of their constitutional rights, specifically freedom of expr¬¬ession and assembly, were demonstrating on Rustaveli Ave, and I’ve seen with my eyes that the other group of people didn’t gave them opportunity to do this,” lawyer Tamar Gurchiani says.

She and participants of Thursday’s rally are concerned that police didn’t properly react and stopped the group from attacking.

The counter-demonstrators call themselves Union of Orthodox Parents, and are mostly known for their violent dispersals of such meetings and of beating people at events like Halloween.

On Friday, many police had gathered near the event in front of parliament, which is not normal practice for such a small scale rally.

“I’m happy to see that today’s rally is peacefully progressing; I think it’s a good sign,’ Pieter J. Langenberg, Netherland’s Ambassador to Georgia, told journalists, ‘it was good to know as well that police stepped in at the right moment and separated people who were fighting.”

During the half hour which the rally lasted, some people passing by approached participants, cursing and yelling at them, but without it violent incidents.

Some representatives of the Union of Orthodox Parents could be seen standing on the other side of Rustaveli Avenue, next to Kashueti Church.

The church’s priest kept his parish inside the church calling on them not to come out until the rally was finished.

“I’m here because I believe that the struggle we’ve seen today is an important struggle, by the way it’s a struggle which is supported by the EU, by many international bodies and it’s about more than tolerance, it’s about acceptance, acceptance of different behavior, which do not create new rights but it’s in order to make sure that everyone in Georgia enjoys the same rights and people I’ve seen today are very brave and we’ve come here with some of my colleagues of the diplomatic corps to support them,” Renaud Salins French Ambassador to Georgia, said on Friday.

Just as the rally was about to end peacefully, two men approached the parliament building and started assaulting participants. The police took them away to a police car; but then a priest intervened and made the police let them go.

He started shouting that the rally participants should be arrested, not these guys. Then he explained that he was keeping his parish inside the church to avoid confrontation between the sides.

“They came here for provocation. They arrested two children here, provoked them.”

The priest accused the organizers of the rally as well as the attendants of trying to divert attention from the events taking place at the Davit Gareja Monastery complex (https://dfwatch.net/border-guards-inside-david-gareja-monastery-25248). Then he suggested that they are suffering from an illness.

“We respect that they are ill. Why not, a diseased person should also be given his own place and niche.”

Georgia’s Ombudsman’s office released a statement on Friday responding to the incident on Thursday, writing that the Public Defender is studying the case.

“The Public Defender of Georgia considers any violent action that is carried out on the grounds of intolerance inadmissible. It is a positive obligation of law enforcement bodies to create appropriate conditions for the exercise of the right to peaceful assembly. Violations of law committed against such a march require swift and adequate response.”

“In consideration of that, in similar cases, the state must take timely and effective measures with the aim of stopping and preventing actions carried out on the grounds of intolerance.”

It should also be noted that EU’s annual report on the European Neighborhood Policy mentions that discrimination on the grounds of sexual orientation remains an issue in Georgian society.