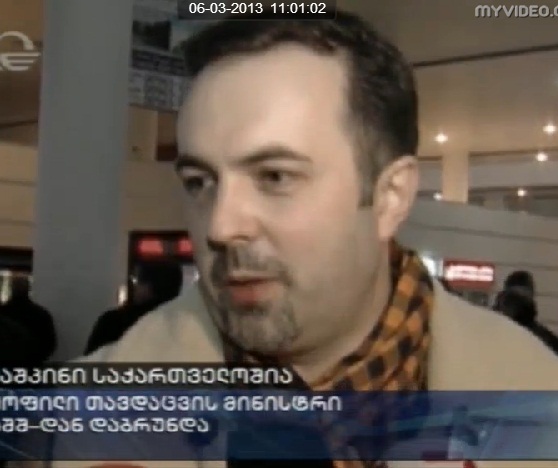 TBILISI, DFwatch–A former defense minister returned to Georgia Wednesday morning, accompanied by his family, to answer questions from investigators if it becomes necessary. So far, there are no charges against him.

(Updated with comments from the Prosecutor’s Office and the Interior Ministry.)

Dimitry Shashkin was defense minister in President Saakashvili’s government the last two months before the 2012 parliamentary election. Like many of his colleagues, he left the country after Saakashvili’s party was defeated in October’s election.

“Everyone knew where I was – in the US. Yet, I am a free person and I have the right to decide where to be,” he told journalists after arrival in the Tbilisi airport. “I am a citizen of Georgia, and I have decided to come back to my homeland.”

Since after the election, Shashkin has been living in the US, reportedly in a luxurious house he rents for USD 4 000 per month, which has raised questions about where he got all that money from.

Shaskin told a news website in the US that he earned his money working for an American corporation, and that he had a ‘very high income’ there. But as DF Watch later reported, the salary at International Republican Institute (IRI), his job before he became minister, was too low to account for his current wealth.

Although today characterizing it as a very high income, in the tax returns, Shashkin reported a monthly salary of USD 500, while documents in possession of DF Watch show that he was paid USD 1 400 during that period. There are also outstanding questions about his wealth while being minister, as his property declarations do not include some very expensive real estate assets which he is known to have owned in Georgia.

When asked by DF Watch how he can afford to rent the house in Washington, he said that as they resettled in the US, he and his wife had sold a shop, a flat and a car, and also his parents and his friends in the US had helped him out.

Shashkin was education minister for the last three years until October, 2012. Before that, he was prison minister.

While abroad, he twice explained that his views are completely different from the views of the new government and that’s why he left. On his way out of the country, he said it was an honor to work in Saakashvili’s government, where his ideas and positions were completely met with others.

Today, he said if there are questions, he is ready to cooperate with the investigation.

The press offices of the Prosecutor’s Office and Interior Ministry told DF Watch that it is not yet planned to question Shashkin, but if any case is launched against of him or with his involvement they will of course question him.