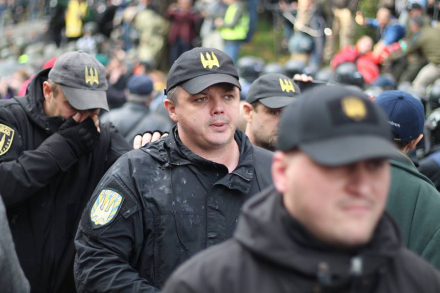 TBILISI, DFWatch–Georgian police have detained six Ukrainian and one Georgia citizen who are members of the Donbass Battalion, a volunteer detachment of Ukraine’s National Guard.

The seven are suspected of ‘illegal purchase and possession of firearms, ammunition and explosive devices’, the Ministry of Internal Affairs stated.

Semen Semenchenko, opposition MP to the Ukraine’s Verkhovna Rada and commander and founder of the Donbass Battalion, reportedly escaped arrest because he is a holder of a diplomatic passport.

The arrests took place at two hotels in Tbilisi on Sunday, just a few hours before the United Opposition started its mass rally in the city center.

Pro-government media further amplified the suspected link between the Ukrainian militiamen and the ‘revolutionary scenario’, after early statements by ex-president Mikheil Saakashvili about ‘another Rose Revolution’, creating the impression that the UNM-led opposition is preparing the violent overthrow of the government.

Six detainees are Ukrainian nationals and one is Georgian. They plead not guilty claiming that the police had planted weapons and ammunition.

The detainees have no connection to the opposition rally in Tbilisi and did not even attend it, Semen Semenchenko wrote in a post on his Facebook page, asserting their innocence. He insists that the seven were visiting Tbilisi solely for tourism purposes and accuses the Georgian government of using ‘this provocation’ for its political agenda.

Donbass Battalion played a key role in the war in eastern Ukraine, including in the deadly battles of Ilovaisk and Debaltseve. A number of Georgian former soldiers are currently serving in Ukraine in different military units, including the Donbass Battalion. Some of them left the Georgian army after the change of government in 2012 and are believed to be supporters of ex-president Mikheil Saakashvili, who was governor of Odessa for eighteen months in 2014 and 2015.

The United Opposition said that it had had no contact with any of the detainees.

“I’ve heard of [Ukrainian] MP Semenchenko. I do not know the others,” Giorgi Vashadze, Grigol Vashadze’s campaign manager, said.