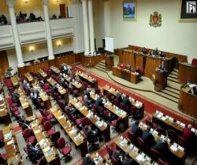 A group of ethnic Armenian Georgians have asked parliament to recognize the Armenian genocide. A scuffle broke out Tuesday as lawmakers tried to debate the issue. (Photo: Interpressnews.)

TBILISI, DFWatch – A scuffle broke out Tuesday in the Georgian parliament during a debate about the Armenian genocide.

Jondi Baghaturia, member of parliament (MP) for the opposition Georgian Troupe party, asked in a speech what the government is going to do regarding a request to recognize the Armenian genocide.

Soon he was facing fierce resistance from Azer Suleimanov, from the ruling National Movement party, and of Azeri origins.

Baghaturia in his speech was referring to a request made by a group of Georgian citizens who are of Armenian origins who Monday asked parliament to recognize the Armenian genocide by the Ottoman empire in 1915-1923. Turkey is opposed to defining the events as a genocide, and Azerbaijan is largely of the same view.

“Yesterday here was citizens of our country – Armenians, from Tbilisi or arrived from the regions, who asked parliament to recognize the Armenian genocide and asked for our support. I was saying then when you held a one-day PR event – jester event and wanted to recognize the Circassian genocide [violence carried out by Imperial Russia in the nineteenth century, ed.], not to do this, because tomorrow our country’s citizens will come, Armenians will come and we will have nothing to say. I’m interested, what you want to answer to these people,” Baghaturia said, and was met with exclamations from other MPs.

He continued saying ethnic Armenians are also Georgian citizens; that they work and fight [probably a reference to the wars in the early 1990s and in 2008, ed.] together with Georgians.

“So you all are responsible for this,” he appealed to the government and the Azerbaijani MP, who was making noise.

Suleimanov threw a tube of vazeline at Baghaturia -– a very derogatory gesture within the local cultural context — and stopped his speech. The Azerbaijani MP wanted to throw a glass too, when Baghaturia threw the vazeline back. Akaki Bobokhidze from the National Movement was also involved in the quarrel.

Other opposition and ruling party MPs tried to defuse the situation for five minutes. Then the plenary session continued despite the resistance.

Several minutes after the incident, members of the Azerbaijani Student Association gathered in front of parliament and protested Baghaturias statements.

Speaker of Parliament Davit Bakradze called for MPs to restrain themselves and asked them not to get involved in ‘a game, which contributes to the enemy’s cause.’

Bakradze said the notion of citizenship is established in Georgia and everyone who lives in Georgia, is a Georgian citizen, regardless of ethic origins. He said the strongest hostility will be the attempt at creating controversy between Georgia and its neighbor country. The Speaker called for MPs not to play a harmful game.

He also noted that “there won’t be any statements in parliament which insults Armenian or Azerbaijani people.”

“We feel the pain of their pain, let’s not make this pain into entertainment and amusement for others and give the enemy opportunity to entertain himself with our common pain.”