New 210 MW hydro power station to be built in Georgia

New 210 MW hydro power station to be built in Georgia 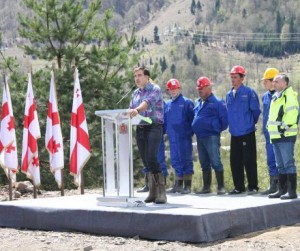 Georgian president Mikheil Saakashvili marked the start of construction work for a new 210 MW power station to tap the energy in the waterfalls of mountainous Svaneti, close to the Russian border. (Official photo.)

The Nenskra power station in the village Chuberi will deliver 210 megawatt when finished.

According to Georgia’s Energy Ministry, the Chinese Company ShinoHydro will build Nenskra HPP. USD 630 million will be invested. Constructions will be managed by Georgian Railway’s subsidiary Company Nenskra.

Until constructions begin road to the location will be rehabilitated. According to Energy Ministry, works will probably end by 2017.

1200 persons will be employed on construction. After starting exploitation of the Hess, it will be possible to replace one energy bloc with 120 megawatt of thermal power plant. In addition, in winter Nenskra Hess will increase water resource of Engur Hess and accordingly it will give opportunity to produce more energy.

Company will sell produced energy in internal marked in winter; in summer energy will be exported to neighboring countries.

Georgian government prepared program Renewable Energy 2008 in order to attract investments to build new Hydro Electric Stations. Within the frames of program, 15 new stations are being built in the regions. In 2012-2013 constructions of twenty new stations will start. Four billion dollars will be invested in energy sector; 3 000 additional megawatt capacity will be created and 13 000 people will be employed on implementation works.

Georgian president said on the opening that government plans to fully replace producing thermal electro energy by imported gas with hydro electric energy, which is about 93 percent of country’s energy producing.

“This is grand event and this is beginning of historic construction. This is principle issue for me because we should learn new technologies, more effective constructions. In five years here will be the biggest hydro electric station, which was ever built after Enguri. In five years hydro electric energy power will increase two time s and more in Georgia.” He said adding that energy is Georgia’s spine for success and independence.

President noted that in two months constructions of NamaKhvan Hess starts and together with Nenskra Hess their capacity will in fact equal to Engur Hess capacity.

“It means independent Georgia is able to build, we tasted independence, what mostly scares our conqueror is that if Georgian people made everything with their hand, it means we don’t need them and we are able to do everything.” He said.

Organizations working to protect environment are categorically against of implementation of these program.

Green Alternative on Monday released statement, which says that implementation of this project, will have negative impact on Nakri Valley, as well as over Nenskra Valley and ecosystem of the rivers.

The statement says about 400 hectares of virgin forests will be cut in Svaneti’s mountains and natural landscape will fully be changed.

Common influence of Nenskra and Khudoni reservoirs will worsen people’s health and cause changes of agricultural practice, it says. Melting process of local glaciers will become significantly active; project also foresees absolute cleansing of plants of the natural valleys and slopes.

Green Alternative informs that on February 23, 2012 during public discussion in Mestia, majority of the population actively expressed negative attitude towards constructions of Nenskra Hess.

They also say that the object hasn’t yet received permits for building and environmental impact.