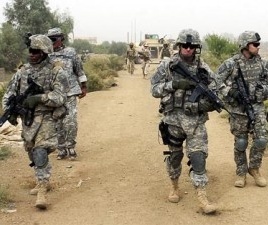 Georgia has up to 950 soldiers in Afghanistan. (IPN.)

TBILISI, DFWatch – Georgia’s Defense Ministry informs that another soldier has died in Afghanistan, bringing the total number of servicemen lost there to sixteen.

Valerian Khujadze was serving in the 31st Battalion in the volatile Helmand province. The incident happened on April 25.

“Khujadze was patrolling when he was hit by an exploding IED (Improvised Explosive Device) and died from the injuries,” the Ministry informed.

According to the statement, Khujadze also served in Georgia’s contingent in Iraq and had been in the army since 2004.

“In 2011 he was awarded the Medal for Participation in Peacekeeping Operations. The family of the deceased military servicemen will receive a package of social assistance in accordance with Georgian legislation.”

In February three Georgian soldiers died in Helmand province when the vehicle they were driving in was hit by an explosion following an insurgent attack.

Georgia is one of the largest contributors to ISAF. Currently there are up to 950 soldiers, but 749 more will be added in spring, which will bring the whole contingent up to a total of 1 700.