Schools closed in Georgia due to outbreak of viral meningitis

Schools closed in Georgia due to outbreak of viral meningitis 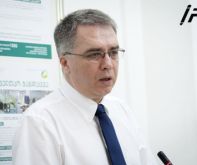 TBILISI, DFWatch–An outbreak of viral meningitis has spread in schools and kindergartens in Georgia the last few weeks, with 142 confirmed cases so far.

Kindergartens and schools up to 6th grade will be closed until May 27, while sanitary measures are being implemented.

This was decided Wednesday at a session between staff of the education and health ministries.

But Health Minister Davit Sergeenko says there is no reason for panic.

“Viral meningitis may peak within a four year time frame, but it doesn’t get severe,” Sergeenko said at a press conference on Wednesday.

He said all the cases are only of medium or light severity.

87 out of the patients are receiving medical treatment at Iashvili hospital in Tbilisi, he said.

About 15 of the cases are in Kutaisi, Georgia’s second largest city, and four in Batumi on the Black Sea coast. The youngest patient is two years old and the oldest 34.

The health minister says there is no vaccine for the virus causing this outbreak. One of the most effective ways to avoid infection is through good personal hygiene.

At the press conference, Sergeenko underlined that there have been no severe cases among all the patients, but added that he has a plan prepared in case the outbreak gets worse.

Later, it was announced that the Health Ministry and Education Ministry had decided at a session to close all kindergartens and schools up to 6th grade until May 27 to tackle the outbreak by beefing up sanitary measures.

Georgia usually has about 150 cases of meningitis in a year, but once every four years the number of cases peaks, as it did in 2006 and 2010.

Parents should be on guard and if they see that a child is irritated, lacks appetite or has fever, headache or other symptoms, they must immediately take them to a doctor.