Salome Zourabichvili not allowed to register as a candidate

Salome Zourabichvili not allowed to register as a candidate 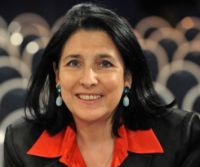 The reason is that under Georgian legislation a citizen of a foreign country cannot become president, even if the person has dual citizenship with Georgian being one of them.

Zourabichvili is a citizen of Georgia and France.

CEC made its decision on Tuesday, a day after she applied to register as a candidate.

To qualify for being president, the constitution requires a candidate to be a Georgian citizen, over 35 years, who has lived at least five years in Georgia and has been living in the country for the last three years. This regulation came into force January 1, 2011.

This is the only article in the constitution which defines who can be elected president, and Salome Zourabichvili’s candidacy meets all of those conditions, but her candidacy violates another part of the constitution, which reads that a person cannot become president, prime minister or speaker of parliament, if he or she has dual citizenship. This regulation also came into force January 1, 2011. And as mentioned, Mrs Zourabichvili holds a dual Georgian-French citizenship.

Parliament is now working on a new draft of constitutional amendments, which include amending the regulation about the citizenship of the candidates. Lawmakers say there must be an equal approach to every official post, but the amendment is only in the process of review and the ballot for the draft will be held in September. The deadline to register as a presidential candidate expires on September 7.

Representatives of Georgian Young Lawyer’s Association (GYLA), which works on election issues, think that Zourabichvili shouldn’t have any problems registering, and if she wins the election she would then be obliged to renounce her French citizenship if the parliament doesn’t pass the new amendment.

The CEC’s statement says that the constitution, which explains who cannot be elected as president, also defines who are prohibited from passive election rights.

Salome Zourabichvili plans to appeal the CEC’s decision. She said at a briefing on Tuesday that her lawyers will sue in court on Wednesday.

“Under the current version of the constitution, I have full rights to be a presidential candidate,” she said, adding that she will inform foreign diplomats about this issue.