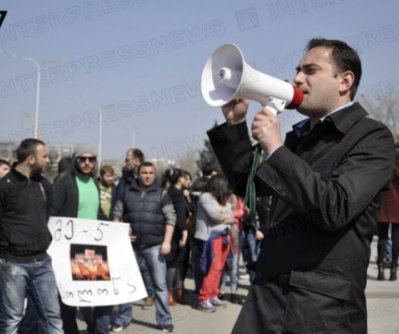 Two people were detained for throwing red paint at party symbols outside the National Movement office in Tbilisi.

The two activists, who were from the non-governmental organization Youth Center, were taken into custody for violating article 150 of the administrative code, Interpressnews reported, citing the Ministry of Internal Affairs.

One of the leaders of Youth Center, Giorgi Tsintsadze, also said the two, Levan Alughishvili and Goga Quchuloria, had been detained by police.

They were taken away after they splashed red paint on a large name plate outside the National Movement office and on a poster of former Prime Minister Vano Merabishvili.

Members of the organization say that most likely, the violators will be given fines.

The demonstration continued after the two were detained, with organizers calling on former president Mikheil Saakashvili to return to Georgia and face questioning by prosecutors.

He must be at the Prosecutor’s Office in Tbilisi at 13:00 on Thursday, or else risk becoming a wanted person.

Prosecutors want to question him about ten cases, including the death of Prime Minister Zurab Zhvania in 2005. Saakashvili has status only as witness in all cases.