Saakashvili supporters in Georgia demand his release from Kiev prison

Saakashvili supporters in Georgia demand his release from Kiev prison 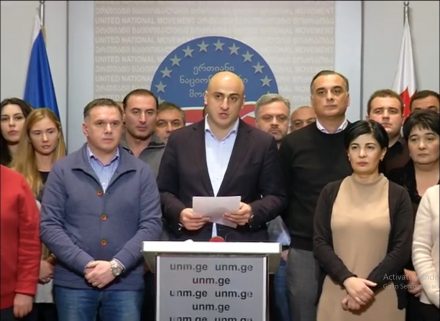 Georgia’s former ruling party expresses solidarity against the “political persecution” of its leader, Mikheil Saakashvili, who is under arrest in Kiev, Ukraine.

“We call upon everyone who strives for the free and democratic future of these two countries to demand from Ukrainian and Georgian authorities to stop Mikheil Saakashvili’s political persecution and release him from illegal imprisonment,” United National Movement stated in an address aired at the briefing on Saturday by the party ruling body head, Nika Melia.

Mikheil Saakashvili’s arrest “is particularly outrageous in light of the historic friendship between the Georgian and Ukrainian peoples and their common struggle against Putin’s Russia.”

The UNM urges “Ivanishvili’s government” “to abandon efforts at trampling on state interests […] otherwise it will get civil to protest across the country.”

The UNM is planning to collect signatures demanding Saakashvili’s release from prison.