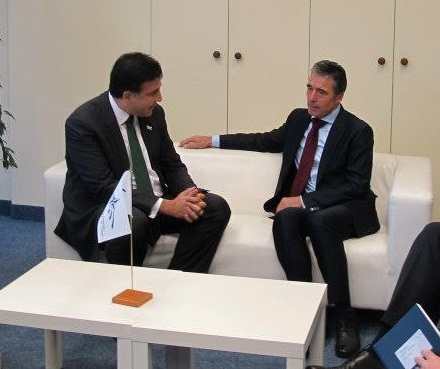 TBILISI, DFWatch — President Mikheil Saakashvili says he can’t remember having heard such a critical tone before from NATO regarding Georgia.

He was responding to a statement by NATO’s Secretary General Anders Fogh Rasmussen, who said he was concerned about the recent detentions in an abuse case in the military in Georgia.

The president is visiting Brussels in parallel with Prime Minister Ivanishvili, both holding meetings with EU and NATO officials.

After meeting with Anders Fogh Rasmussen earlier in Prague, the president said he doesn’t remember having often heard such a critical tone to other countries either.

The president once again drew attention to a failed visit by NATO’s Georgia committee, which was postponed due to the recent detention of military officials in the country.

“I told NATO Secretary General maybe it is possible for the committee to arrive by spring. I told him that maybe NATO minister’s meeting won’t fail in December and we achieve some progress. If it won’t be MAP in such a situation, I don’t know how it can be,” he said, referring to a Membership Action Plan, the name of the formal process by which NATO accepts new members.

The president expressed hope that the problems aren’t conscious, but due to lack of experience.

“I welcome the prime minister’s visit to Brussels, and I think he will clearly see Georgia’s interests,” Saakashvili said. “After the velvet power transfer and elections we had a chance to make a leap to NATO. I really do not understand why those rash decisions were necessary, they could wait a bit.”

“‘I’m extremely concerned about the development we have, not least related to recent arrests of political opponents in Georgia,” he said.

President Saakashvili and Secretary General Rasmussen spoke about the current democratic processes in Georgia and the country’s Euro-Atlantic aspirations.

NATO integration is the country’s unchanged priority, the president said.

“We had free and fair elections and a peaceful transfer of power – we passed this test. It is time to see concrete steps towards the fulfillment of the Bucharest statement, new tangible steps towards our membership in the Alliance,” Saakashvili said in his speech.

November 7, Bacho Akhalaia, former Interior Minister, Giorgi Kalandadze, Head of General Headquarters and Zurab Shamatava, Commander of Fourth Brigade, were detained. They were all charged with abusing their powers, while Akhalaia is additionally charged with illegal deprivation of freedom and torture.