Saakashvili says his PM will continue after October 1

Saakashvili says his PM will continue after October 1 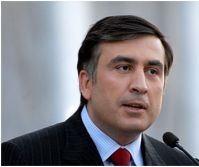 The government of President Mikheil Saakashvili does not rule out that his prime minister will take over as president after he leaves. (IPN.)

TBILISI, DFWatch – The government in Georgia has placed the speaker of parliament on the top of its party list, which probably means he will keep his post if they win.

The Georgian constitution was amended in 2010, and one of the things it did was reduce the president’s authority, while simultaneously increasing the powers of the prime minister.

President Mikheil Saakashvili cannot stay on as president for one more term, as his second presidential term is ending and there is a two term limit. In political circles, the constitutional amendment is considered as an attempt to repeat what Vladimir Putin did in Russia, often called “a Russian scenario”. There is an expectation that President Mikheil Saakashvili strengthened the position of prime minister to prepare for himself to fill it. In addition, he has never ruled out that he is planning to take this position.

The amended constitution will come into force after the presidential election, which will take place in October 2013.

Chiora Taktakishvili, spokesperson for the ruling National Movement party, said at a briefing Monday that the top spot on the party’s election list will be the current parliamentary speaker, Davit Bakradze. The current prime minister will be a candidate for prime minister after the parliamentary election October 1, and will defend the ruling party in political debates in the coming six weeks.

The last date for parties to present their election lists is August 31.

According to Georgian legislation, there are 150 members of parliament: 73 majoritarian (first-past-the-post districts) and 77 elected following the system of proportionality. The ruling party and the largest opposition bloc have nominated almost all their majoritarian candidates.

The ruling party spokesperson also said that the government is ready to participate in debates with its main political opponent, Georgian Dream, headed by the billionaire Bidzina Ivanishvili, who himself is barred from standing for election due to technicalities.

The candidate for prime minister and the number one on the list are ready to introduce the party program and explain to citizens the views of the party and how they plan to solve the country’s problems, Taktakishvil said, adding that the National Movement invites its political opponents to TV debates.