Saakashvili says Georgia must choose between Russia and NATO

Saakashvili says Georgia must choose between Russia and NATO 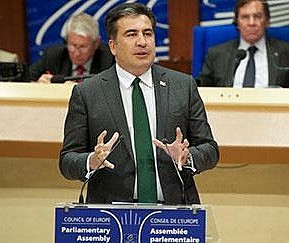 President Mikheil Saakashvili criticized the new Georgian government of trying to combine the impossible: Good relations with Russia and NATO at the same time. (CoE photo.)

TBILISI, DFWatch — President Mikheil Saakashvili criticized his own prime minister for saying that Georgia should have good relations with both Russia and NATO.

In a speech to the Parliamentary Assembly of Council of Europe (CoE) Monday, the president criticized his arch enemy, Prime Minister Ivanishvili, for a statement during a visit to Armenia and said it was “very strange” how the PM underlined that a country may have good relations with NATO and Russia at the same time, and named Armenia as an example.

He said Georgia has declared its NATO and EU aspirations, but Armenia hasn’t.

The president thinks this unusual declaration by the PM may create doubt about Georgia’s NATO membership.

“I do think that Georgia should integrate with NATO and have good relations with Russia at the same time,” he said, and added that he was the author of an initiative to establish visa free travel for Russian citizens coming to Georgia, as well as to support Russia becoming a WTO member.

The president said it is one thing to have improved relations with Russia, but another to retain the main aspirations of the country. People didn’t vote for changing the main course for the country, Saakashvili said.

The president claimed the new government led by Prime Minister Bidzina Ivanishvili is targeting former government officials and local authorities, referring to how Georgian Dream activists have been canvassing local government offices since their election win, demanding the step-down of Saakashvili’s allies.

The president also spoke of “a campaign to silence the political opposition”, and a campaign to create a constitutional majority in parliament “through direct blackmail, pressure, criminal cases against MPs and their families.”

“We have seen the public linking of a wave of arrests by the new authorities to political activities of the opposition,” he said, adding that they have also seen attempts to destroy his party, the UNM, through the judiciary and daily attacks on judges, and also the constant harassment of “independent media”, starting with the Georgian Public Broadcaster.

The Georgian president accused the new government of forcing the director of GPB to resign, and of wanting to shut down the TV channel.

Further plunging into domestic politics, the president admitted that his party’s governments didn’t succeed in all its reforms, and that much more needs to be done.

“But what the new government should do and we wish them success, they should go further in building our democratic framework and not try to undermine what has been built.

After criticizing the Ivanishvili government for a long time, the president said he wants to create a new model of cooperation and cohabitation. He reminded listeners that he had the right to create a political crisis right after the election by dissolving parliament, but didn’t do it.

He also reminded people that he proposed a plan of cooperation with the new government, which would simplify the process of cohabitation.

“Let us work together to improve what can be improved in our democracy, let us work on principles on which we can agree, the very principles which are the basis of the Council of Europe,” Saakashvili said.