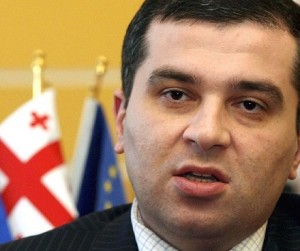 Speaker of Parliament Davit Bakradze is surprised that opposition billionaire Bidzina Ivanishvili rejects an offer to participate in politics as a foreigner. (IPN.)

TBILISI, DFWatch – One of President Mikheil Saakashvili’s top officials says he was taken by surprise by an open letter from opposition billionaire Bidzina Ivanishvili yesterday, in which he said that he will not make use of a new tailor-made constitutional change which would have let him participate in elections despite not being a citizen.

Speaker of Parliament Davit Bakradze says that the businessman and his group for months have wanted to participate in elections, but couldn’t because Ivanishivli was stripped of his Georgian citizenship.

“Yesterday we adopted amendments which completely solves this problem,’ the Speaker said during an campaign event in Kutaisi, ‘so to be honest his statement yesterday was a bit unexpected for me. They changed their position 180 degrees.”

Bakradze said that if Ivanishvili wants to participate in elections, there are no restrictions any more and if he wants to be Prime Minister it’s not a problem either.

“Showing hands on government, when we solved all problems, I think is just incorrect and inaccurate.”

Yesterday, parliament adopted constitutional amendments which allow an EU citizen born in Georgia who has lived in the country for the last five years to vote and participate in elections until January 1, 2014. The amendments are generally understood as tailor-made for Ivanishvili.

President Mikheil Saakashvili revoked the businessman’s Georgian citizenship in October, 2011, after the latter declared he would go into politics. In 2004, the same president granted the businessman Georgian citizenship on the grounds of special merits to the country. Ivanishvili re-applied on the same grounds this spring, but this time the application was rejected.