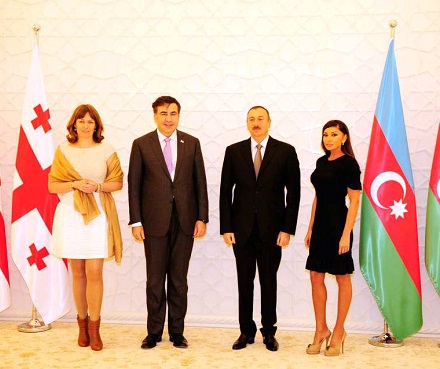 TBILISI, DFWatch–President Mikheil Saakashvili says no matter who is in government, the country will continue the same foreign policy course, also in relations with neighboring Azerbaijan.

The Georgian leader visited Azerbaijan for two days and held meetings with his colleague Ilham Aliyev; with the parliament speaker, members of parliament, prime minister and other officials.

The president was accompanied on the trip by his wife Sandra Roelofs, Tbilisi mayor Gigi Ugulava, former prime minister Nika Gilauri, and parliamentarians from his own party, the National Movement.

Saakashvili said after the meeting with Aliyev that he cannot think of another larger country which is developing as fast as Azerbaijan. He said he is happy that Prime Minister Bidzina Ivansivhili visited Baku with a government delegation, and noted that the PM was also sure about the importance of continuing the cooperation between the two neighboring countries.

At a joint press conference, the president also said that the road to EU and NATO integration goes through having close relations with Azerbaijan and Turkey.

“Azerbaijan is Georgia’s friend and an important strategic partner,” he said. “No-one has done as much for Georgia, as Azerbaijan,” he added.

The two presidents spoke about bilateral relations and areas of future cooperation.

Aliyev remarked that Georgia also remains an important strategic partner, and that regional security is dependent on relations between the two countries.

Both presidents spoke about the importance of the ongoing construction of the Karsi-Akhalkalaki railway, which will connect Turkey and Azerbaijan through Georgia.