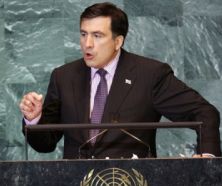 TBILISI, DFWatch–President Mikheil Saakashvili Wednesday gave a speech at the 68th session of the United Nations General Assembly. His address mainly dealt with the threat Russia in his view poses to Georgia and other Eastern Partnership countries.

The Russian delegation left the hall in a sign of protest.

The Georgian president spoke about the recent actions by Russian soldiers in the villages Ditsi and Dvani, which are in the zone of conflict near the contested Georgian territory South Ossetia; the site of a brief war five years ago.

“The annexation of Georgian lands by Russian troops continues,” he said. “Yesterday, the occupants have expelled again Georgian citizens from their homes and villages, the homes and villages of their parents and grand-parents; in daylight and in total impunity.”

Saakashvili says that despite attempts by Georgia’s new government to mend relations with Russia, and friendly statements in the last months, Russia keeps advancing its positions, dividing communities with new barbed wire, threatening the economy and putting the sustainability of Georgia in question.

The president says it doesn’t matter what the names are, Gamsakhurdia, Shevardnadze, Saakashvili or Ivanishvili.

“The current Russian authorities know perfectly well that as soon as strong institutions are built in Ukraine, Georgia, Moldova, or any other place, as soon as functioning states emerge, such institutions, such states will reflect and enforce the will of their people, which is to become fully independent and move towards Europe.”

In his opinion, successful reforms and building a functioning state is seen by Russia as a virus which needs to be eliminated, and that’s why Georgia suffered an embargo in 2006, a war in 2008, and an invasion.

Saakashvili also spoke about the planned Eurasian Union, which Russia and its president has talked about much lately; and which the Georgian prime minister did not exclude joining. (link to article)

The president recalled previous conflicts in the Caucasus region and Eastern Europe, including the Armenia-Azerbaijan conflict in 1905, the conflict of Nagorno-Karabach, and the war in Abkhazia in 1990s.

“Everywhere, the Empire has always inflamed the relations between subjugated people and separated them by a wall of fanatical antagonism.”

Saakashvili believes that the Eurasian Union is fuelled by intolerance and led by old KGB structures. He said it is created in order to revive an old empire.

“Of course, joining the Eurasian Union is therefore very easy. There are no social, economic, or political criteria to be met: becoming a colony, in fact, requires no effort at all,” he added. “Passivity and mediocrity are the only requirements.”

The president also said he believes that the ‘Russian project is doomed to fail.’

Saakashvili said his second term comes to an end and he’s proud of the accomplishments that Georgia achieved during his governments, which has brought the nation ‘closer ever to its European dream’.

“We did many good things. But I realize that some of these things were done at a very high cost,” he added. “In our rush to impose a new reality, against the background of internal and external threats, we have cut corners and made mistakes.”

“We went sometimes too far and other times not far enough,” he continued. “I acknowledge fully my responsibility in all these shortcomings and I sincerely care for all those who have felt that they did not benefit enough from our work-or even that they were victims of our radical methods.”