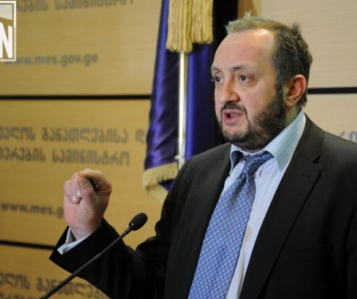 TBILISI, DFWatch–39 percent of Georgians would like to have Georgian Dream’s candidate, Giorgi Margvelashvili, as their next president. 18 percent support Davit Bakradze from the United National Movement, according to a new survey by the National Democratic Institute (NDI).

The organization Thursday published its political party ratings, which are one part of a larger survey that also includes social issues.

16 percent of the questioned don’t know who they would like to be their new president. 7 percent say Nino Burjanadze is the candidate they support, while Shalva Natelashvili, from the Labor Party and Giorgi Targamadze from the Christian Democrats each get 3 percent.

The Patriarch as usual has the largest support among well-known persons in the country. 94 percent say they like him, 2 percent cannot say, 3 percent refused to answer, while only one percent don’t like him. In the last survey in June, 92 percent said they liked him.

He is followed by Prime Minister Bidzina Ivanishvili, with 69 percent; the same as in June. 15 percent don’t like him, 12 percent said they don’t know.

Davit Usupashvili, Speaker of Parliament, is liked by 60 percent, one percent less than in June. 22 percent don’t like him

When it comes to the presidential candidates, 56 percent said they like Giorgi Margvelashvili, a significant increase from the 45 percent who said they liked him in June.

Last year, before the parliamentary election, the NDI’s party ratings did not correctly predict the results of the election, but showed a different picture.

In the election, UNM received 40.34 percent of the votes, while Georgian Dream won with 54.97 percent.

Giorgi Targamadze, candidate of president, thinks the results of NDI’s new poll are interesting because any survey is interesting during election time in regards to knowing the public’s attitudes.

“Every survey for the election headquarters is a very good manual, in order to direct our programs and activities towards people’s interests,” the Christian Democrats leader says.

He adds that both the support and the approval rate towards the Christian Democrats, including him as a leader, have increased, which is a good basis in order to be more active and give more reasons to voters to support him.

During the opening of election headquarters in Gardabani, he said that NDI is an international organization and he has no grounds to doubt their results.

“The fact that the difference between me and the government candidate is only 20 percent, proves that we’ll have quite competitive and vibrant presidential election. It is important to be calm and have stability,” he said.

For years, when the UNM was in power and remained on the top of NDI polls despite public attitudes, UNM kept declaring its trust in these polls, and now the party couldn’t have done other evaluation of the new poll, more over they hold the second place in the most recent one.

“I can directly say that this is a shameful poll. I think NDI should have been quite reasonable this year, after last year their poll showed a 40 percent error claiming that UNM would win with 70 percent, Targamadze would receive 30 percent of votes and Ivanishvili wouldn’t get anything. They shouldn’t make the same mistake after those shameful results,” she remarked.

Burjanadze thinks this is no mistake anymore but rather a policy by NDI to get society used to biased elections.

“They must understand that they cannot falsify results, because then the election is a total fraud so that Margvelashvili gets the first place and Bakradze the second place. The Georgian population won’t allow total fraud,” she said, adding that people won’t accept it and attitudes toward the West will radically change to the negative.

“I warn our western friends to stop doing it,” she said.