Ivanishvili has decided on who will be his successor

Ivanishvili has decided on who will be his successor 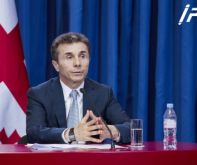 TBILISI, DFWatch–Georgian Prime Minister Bidzina Ivanishvili says he has already selected a candidate for his successor, which will be the most powerful person in Georgia.

Ivanishvili said Wednesday he has made a choice between three candidates, but defers on naming any of them, so as not to take the focus away from the upcoming presidential election.

The PM Wednesday held a four hour meeting with a group of economic analysts at his business center in Tbilisi.

The purpose of the meeting was that the PM wanted to hear the opinion of the experts and what they think is important for the country right now.

He was asked this question during the meeting, and it seemed to annoy him.

“Do I have any obligation to name him now?” he said. “I am absolutely consistent and I’m telling everything consistently.”

He said it is natural that there is interest in this but he thinks it is more natural that he doesn’t name him, for his own reasons.

“Today it can’t be politically justified, as there is an ongoing presidential election. We have a perfect presidential candidate, Giorgi Margvelashvili, whom I respect very much,” he said, adding that all attention must be focused on the election right now.

Ivanishvili said he thinks that people will have to wait, even though everyone wants to know who will replace him as PM.

In the end, he said that the choice has already been made. He had three options.

“I was looking at three men and I will name all of them if youwill need, in the end,” he said. “I have more time. Why must I hurry, really? There is more time and I will use it as best as possible, not to make a mistake. There is no such obligation today.”

The PM said that in the next government, ‘one or two’ ministers may also change after he leaves his post, but no more changes will be done.

After he goes to the civil sector, Georgia will have very good ministers and a very good prime minister, he continued.

He also said that after he leaves politics, he will ‘influence the government from the position of an engaged citizen publicly, and not from the back or underground’.