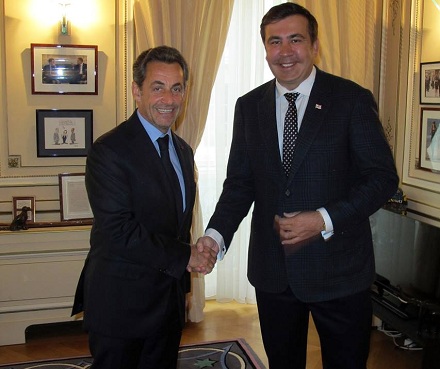 According to the president’s press office, the main topic of their conversation was Georgia’s integration with Europe and the importance of the Sarkozy-Medvedev cease fire agreement, which was signed after the Russia-Georgia war in 2008.

The president also met with members of the French parliament. His Europe trip will also include meetings in other EU countries.

“I spoke with my friend Nicolas Sarkozy for long time,” the president said after the meeting. “He is not the past of France, but the future of the country, and Europe and everyone knows it. That’s why this relationship is very important for me.”

The president said he thinks Sarkozy is a symbol of Georgia’s territorial integrity. Saakashvili thinks it is a problem that the new government stopped mentioning the Sarkozy-Medvedev agreement, while before the 2012 parliamentary election, Europeans and Americans used to remind Russia about it every week. He says that as soon as the government stopped talking about it, Georgia’s partners also stopped talking about the agreement.

Saakashvili called on the government not to stop talking about the agreement, which Russia violates every day by installing barbed wire and fences, and army build-up.