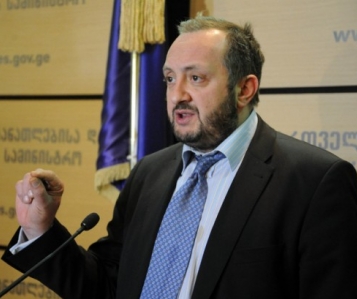 TBILISI, DFWatch–President Mikheil Saakashvili and ex-president Eduard Shevardnadze are invited to the inauguration of Giorgi Margvelashvili, the newly elected president.

Panjikidze said it is unfortunate that there is no possibility to do so in Tbilisi. Georgia’s parliament building was moved to Kutaisi, a city in western Georgia, by the previous government.

“We found an optimal option in order to have a plain inauguration with not many expenses and we decided to conduct it in Tbilisi in the yard of the former parliament building,” she said, adding that there will be a military component in the ceremony; the national anthem will be performed and a flag-raising.

Panjikidze also said that November 17, there will be four events in connection with the inauguration. One will be held in the yard of parliament, where the president will be sworn in. Then he will move to Heroes’ Square to honor Georgia’s heroes. Another event is a concert, which might be held in Rustaveli Theater, and the last event planned is a reception for foreign guests.

There will be no flyover during the inauguration, nor will there be heavy military machinery, but military staff will participate.

The yard of parliament was picked in order not to block Rustaveli Avenue or other streets in the capital.

“We have sent about 70 invitations abroad to partner countries. The Russian delegation is not among them,” she said.