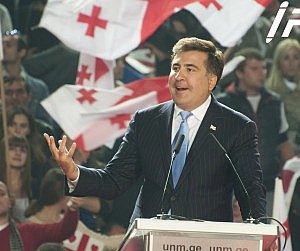 TBILISI, DFWatch–Former Georgian President Mikheil Saakashvili has given up his citizenship of his own country in order to assume the post as governor of Odessa in Ukraine.

Saakashvili earlier refused to give up his Georgian citizenship. A few months ago, he declined a high post in the Ukrainian government, because he didn’t want to give up his the citizenship of his native country.

He says that in order to receive dual citizenship it is necessary for Saakashvili to apply to the president and then Margvelashvili has to make a decision. But this requires appropriate documentation, and recommendations from the Justice Ministry and Interior Ministry.

Representatives of the President’s Administration told us they have not received any application in Saakashvili’s name yet.

Members of his party have not commented yet regarding whether Saakashvili will apply to Margvelashvili for dual citizenship.

Another issue related to Saakashvili’s citizenship is him being a leader of the National Movement. Today he is UNM leader, but under Georgian law, a foreign citizen cannot be leader of a political party in Georgia.

But spokespersons for the National Movement say that it is too early to tell whether Saakashvili will leave the position as party leader; this depends on what the government will do.

Giorgi Vashadze from the National Movement told journalists that the party will not comment until after the government has made a decision about Saakashvili’s dual citizenship, but he didn’t specify if the ex-president plans to submit an application for dual citizenship.

Spokespersons for the ruling coalition say that if Saakashvili decides to get dual citizenship, this will be ‘an irresponsible and insulting decision.’