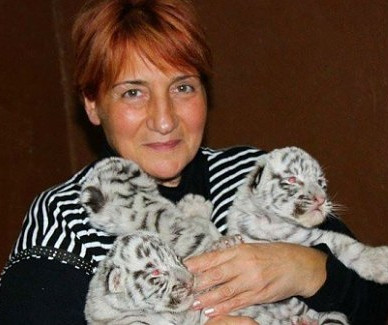 TBILISI, DFWatch–A woman employee of Tbilisi Zoo who was attacked by a tiger and her cubs has recovered. Doctors earlier considered amputating her legs.

Guliko Chitadze, who has worked at the zoo for more than 25 years and raised the three cubs herself, had to amputate one of her arms and received multiple injuries in the attack.

However, Tbilisi Zoo quoted her after regaining consciousness that she is missing her animals.

“I wonder how they are, Marta, Troa and Eva, without me,” she said, referring to the cubs.

Now she is undergoing rehabilitation, while people are sharing a short video interview from Palitra TV (https://www.youtube.com/watch?v=P7ERfFZ_lWM) where she explains how much pleasure she gets out of being with her animals.

“I can never imagine living without her,” she says on the background of footage of her playing with tigers from outside the cage.