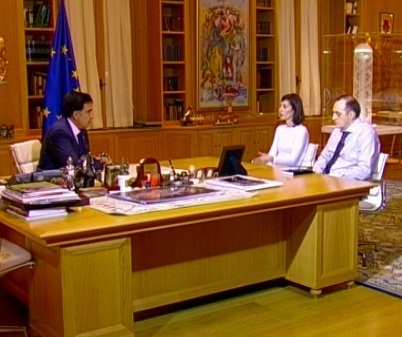 TBILISI, DFWatch — President Mikheil Saakashvili Friday told his acting interior minister and chief prosecutor to do everything to prevent the mafia from crossing the border into Georgia.

After it became clear that Bidzina Ivanishvili’s coalition was going to win the election, pro-government public figures started saying that this new force, Georgian Dream, will bring the country back to earlier times when the mafia ruled, and that the coalition leader wants to bring Georgia closer to Russia rather then West.

At Friday’s session with acting interior minister Eka Zghuladze and chief prosecutor Murtaz Zodelava, the president once again raised this issue, telling them that they should not let the mafia get in.

“Under Georgian law, being a ‘thief-in-law’ is punished by the criminal code and we should take care of it,” Saakashvili said. “I am sure that under democratic conditions their time will never again return.”

He said his government has acted with a sense of responsibility, and that the new government must do so too.

“The election campaign and the time of confrontation has ended,” he explained. “We said what we said. We recognized the election results. We should all respect the constitution and every law.”

Eka Zghuladze said at the meeting that the order which has been established in Georgia is an accomplishment for the whole country, not for a specific minister. She said the police are doing everything to prevent crime and not to give it an opportunity to spread.

Addressing the recent prisoner abuse scandal, the president said that violence committed by the prison administration is now prevented, but there shouldn’t be a change into complete lawlessness inside the prison. He said he will talk about this issues with the new prison minister, Giorgi Tughushi.

Saakashvili said there will be a transfer of government in accordance with constitution regulations and this process will not have any consequences for the country’s day to day security.

He expressed his readiness to uphold the law and to cooperate with the new government to prevent crime and violence.